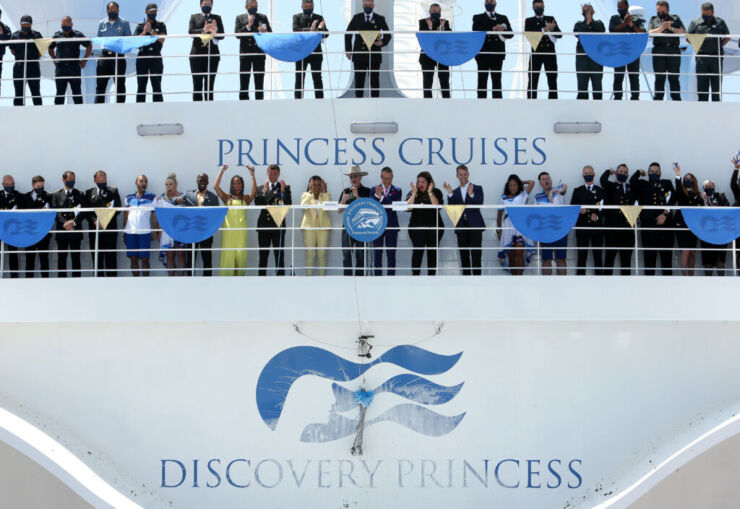 Standing together at the Retreat Pool on the open deck of Discovery Princess with the ship’s Captain Gennaro Arma, they pronounced, “We name this ship Discovery Princess. May God bless her and all who sail on her.” They then sent a giant Nebuchadnezzar-size bottle of champagne against the ship for the celebratory smash, officially welcoming Discovery Princess into the fleet of Princess Cruises, the world’s leading international cruise line and leader on the west coast.

The “Discover Our World” themed ceremony blended maritime tradition with contemporary elements, celebrating the cruise line’s exclusive, seven-year Discovery at SEA™ program – bringing the spirit of curiosity and exploration to every cruise through branded experiences like Shark Week at Sea, exclusive shore excursions and onboard activities such as the Camp Discovery youth centers and Stargazing at SEA.

“Today is celebration to remember as our newest ship, Discovery Princess, is officially named by this talented group of experts and personalities – Randy, Alex, Adam, and Page,” said John Padgett, Princess Cruises president. “We can think of no more fitting godparents to mark this significant milestone.”

The 3,660-guest Discovery Princess was built at the Fincantieri Shipyard in Monfalcone, Italy, and is the sixth and final Royal-Class newbuild sharing all of the spectacular style and luxury of her sister ships – Enchanted Princess® Sky Princess®, Majestic Princess®, Regal Princess® and Royal Princess®.

As part of the leading cruise line on the west coast, Discovery Princess debuted in Los Angeles on March 27, sailing a series of Mexican Riviera and California Coast voyages from March 27 – April 24. After the naming ceremony in Los Angeles on April 29, the ship will head up the Pacific coast to begin a season of seven-day Alaska cruises from Seattle, making her the newest ship sailing in the Alaska region.

With an array of innovative new experiences, guests will enjoy 270-degree sweeping views from the Princess’ largest balconies at sea in the Sky Suites, unwind in ultimate comfort at The Sanctuary and indulge the senses with world-class dining options. Plus, Princess live entertainment presents mesmerizing Broadway-style production shows that can only be seen in the state-of-the-art Princess Theater, including the newest show, Spotlight Bar.

In addition, Discovery Princess delivers Princess MedallionClass Vacations which begin with the Medallion™ wearable, a quarter-sized, device that enables everything from expedited contactless boarding to locating loved ones anywhere on the ship, as well as enhanced service like having whatever guests need, delivered directly to them, wherever they are on the ship. In addition, guests can share their favorite cruise moments using MedallionNet, the best Wi-Fi at sea, as well as stay connected with friends and family back home, work remotely anywhere on the ship, quickly post content and stream favorite movies and shows.