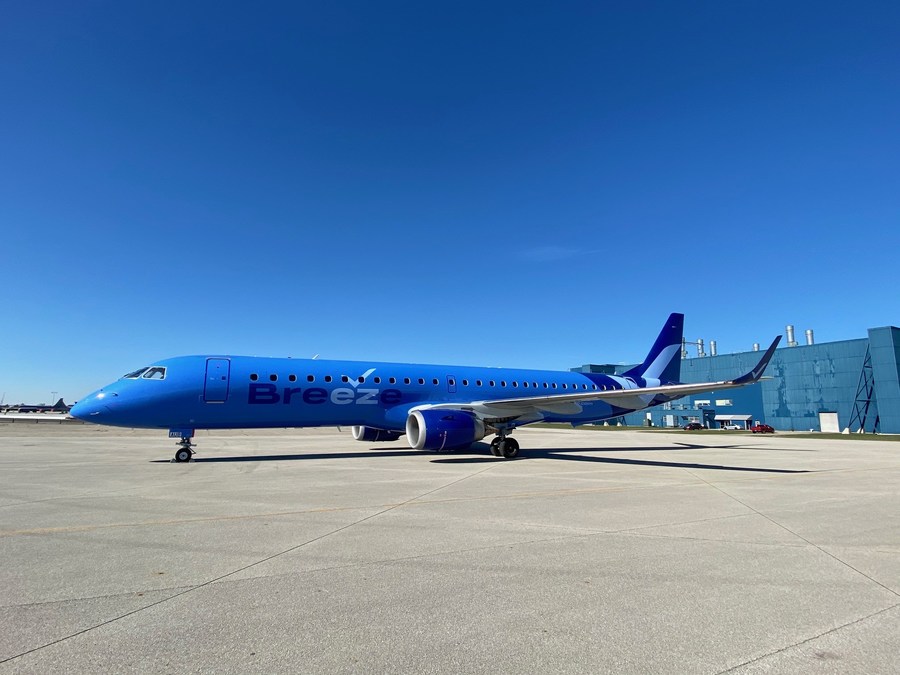 Breeze is adding 10 new nonstop routes from TPA – including six that are currently unserved out of Tampa. With blue balloons, a themed cake and a champagne christening, Breeze Airways launched its inaugural flight, nonstop to Charleston, from Tampa International Airport two days ago.

The new airline, founded by David Neeleman (who co-founded WestJet, JetBlue and others), is gaining a name in the aviation industry with its Seriously Nice attitude, blue livery and ultra-low fares.

Looking for an affordable flight that you’ve (probably) never taken nonstop from TPA? See the new routes below along with a few reasons to go there.

Smack dab in the middle of the United States, the Thunder dribble and the cowboys lasso. Oklahoma City is home to museums, memorials and so much more. Stop at Bricktown for a trendy bite to eat at the Collective, the city’s first food hall, or watch a beautiful sunset at Lake Hefner. The city’s seasons are apparent, reaching high temps in the mid-90s during the summer and lows dipping into the 20s in winter months. While you’re visiting, be sure to grab an onion burger – a burger with caramelized onions in the patty – which is known as an Oklahoma City specialty.

Cruise down the famous Route 66 for about two hours from OKC and you’ll reach the state’s next-largest city by population: Tulsa. Home to the Blue Dome and the “Center of the Universe,” Tulsa isn’t all oil and tornadoes. In fact, one of its tourist attractions, the Gathering Place, was recently named the Top New Attraction in the U.S. by USA Today thanks to its massive outdoor space, kids play areas and free activities, such as zip-lining and paddleboarding. While you’re in Tulsa, take a pic with the Golden Driller – a 75-foot statue of an oil worker that weighs nearly 22,000 tons and has been a landmark since 1966.

Though it is known as home to the world’s largest naval base, Norfolk has more to offer than just its military ties. The city is located less than 30 minutes from Virginia Beach and under an hour from Williamsburg. It has been voted one of the Top 10 Booming Destinations in recent years. If you’re headed for a visit, be sure to check out the Virginia Zoo, Battleship Wisconsin and the Nauticus Maritime Center.

Just a 2-hour drive to the famous Ozarks, the Bentonville/Fayetteville region of Arkansas is more than just the home of Walmart headquarters. Dive into your creative side at the Walton Arts Center in Fayetteville or the Crystal Bridges Museum of American Art where admission is free. Feeling outdoors-y? Hit the dirt on two wheels as Bentonville calls itself the Mountain Biking Capital of the World. Sports fan? Hit up a University of Arkansas football game and call the Hogs!

Known as “Rocket City,” you’ll find the U.S. Space and Rocket Center, the NASA Marshall Space Flight Center and the United States Army Aviation and Missile Command in Huntsville, Alabama. Beyond the rockets and missles, Huntsville is also full of parks and botanical gardens like the Big Spring International Park or the Huntsville Botanical Gardens. Just be sure to check the forecast as this central-U.S. state averages more than 100 days of rain each year.

Akron, Ohio, known as the ‘Rubber Capital of the World’ because of its tire-manufacturing roots, is home to many landmarks, such as the Brandywine Falls and the beautiful-to-visit-during-winter Brandywine Ski Resort. This northern Ohio city is also the birthplace of its fair share of American staples: the ice cream cone, the hamburger AND two NBA superstars: Steph Curry and Lebron James. Bringing the family on a trip? The city houses attractions like the Akron Zoo and the Akron Art Museum. Visiting Canton, Ohio? Be sure to check out the Pro Football Hall of Fame or Canton Classic Car Museum.

Other routes on Breeze Airways include nonstops from Tampa to Charleston, SC, Louisville, KY, Richmond, VA and Columbus, OH. All 10 routes are currently available for booking and rates start as low as $39 one way.