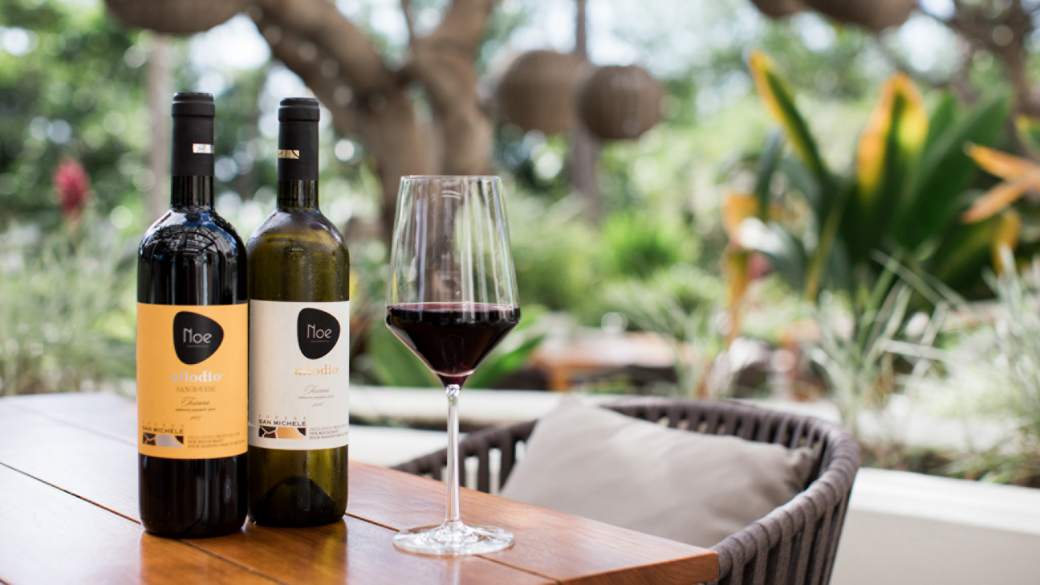 “We are incredibly proud to launch our first-ever private wine label here at Noe,” says Martin Knaubert, Director of Food and Beverage at Four Seasons Resort Oahu at Ko Olina. “Wine is an integral part of the epicurean experience and the introduction of Noe Allodio – developed by Podere San Michele, a family-owned vineyard with an incredible reputation – will truly elevate Noe’s already acclaimed cuisine with furthering the handcrafted approach and offering a unique gastronomic journey for our guests.”

Noe Allodio Sangiovese by Podere San Michele – A 2015 IGT Tuscany sangiovese vintage, Noe Allodio Sangiovese is a sangiovese with a slight addition of syrah, a nuanced ruby ​​red wine with intense aromas of cherry chocolate, wild berries, and violet. Aged in French oak barrels, it is power and elegance, perfectly combined.
Noe Allodio Viogner by Podere San Michele – A much sought-after 2018 vintage of 100 percent viogner with an intense aroma of apricots and stone fruits, mineral notes and a long finish of bitter almonds, Noe Allodio Viogner beckons the palate with drinkable allure.

Freedom in the “Garden of Tuscany”: The History of the Noe Allodio Vines

The new Noe vintages, served against the sunset backdrop of Oahu’s breath-taking coastline, carry a pedigree of winemaking that began in the region of Val di Cornia, often called the “Garden of Tuscany.” Sharing a mountainous geography surrounded by the presence of the sea, the restaurant draws on its Tuscan origins to source two beautiful vintages grown in an area between the Tyrrhenian Sea, the mountains of Gerfalco, and the municipality of San Vincenzo.

The winemaking tradition of the Val di Cornia Garden of Tuscany dates back to the Etruscan period, when the valley was covered by rows of grape vines. The region became known as the Etruscan Coast, and after thousands of years, wine is still an element of vital importance for the region, affirmed by internationally renowned vintages.

The town of San Vincenzo was founded in 1285 as the origin of the name Allodio can be traced back to the moment when the landlords of the region chose to subdivide and assign local lands to the sharecroppers, making these farmers “allodial” (free men). They became full owners of the lands they worked, no longer subject to obligation by anyone.

To remember this history, Giorgio e Tiziana of Podere San Michele decided to use the name “Allodio,” and thus Noe Allodio comes to Hawaii in 2020, complementing one of the most extensive wine lists in the Hawaiian islands, recognised for three consecutive years with a Two Glass Wine Spectator Award of Excellence.

Until 1956, Podere San Michele was part of the Fattoria di Biserno, owned by Roman of Gherardesca (owners of Sassicaia Vineyard.) Purchased by the Socci family, Podere San Michele reached a turning point in wine production in 1994, thanks to the passion of new generations. Since 2000, the women of the family have taken the reins of the company with commitment and passion.

In recent years, Podere San Michele has made innovative choices in the varieties of vines planted and agronomic choices to produce a natural, organic product; the old vines have been tidied up to create new vineyards, with the sole objective of achieving a high quality wine production.

Noe Allodio vintages are a fine expression of the Costa degli Etruschi, expressing a love of nature akin to Hawaiians’ love for the ‘aina. From 2004 to 2008 a majority of Podere San Michele wines were produced exclusively for the two Michelin star restaurant Il Gambero Rosso owned by Chef Fulvio Pierangelini, voted 12th best restaurant in the world in 2008. Now produced exclusively for Noe at Four Seasons Resort Oahu at Ko Olina, the Allodios are paired with the award-winning culinary expertise of Noe Chef de Cuisine Ryo Takatsuka.