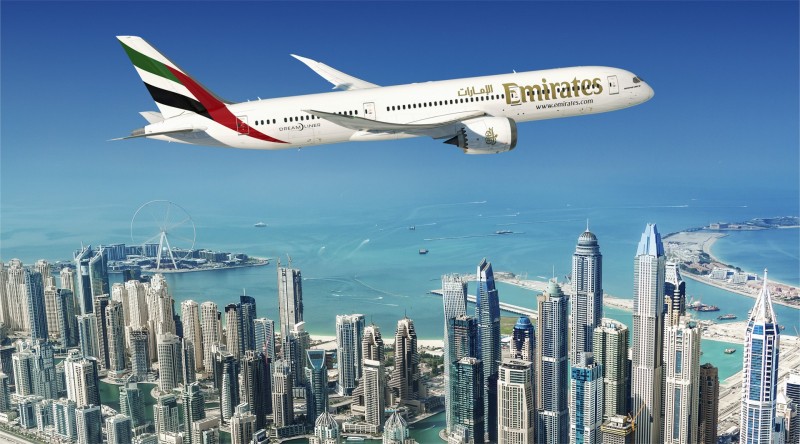 Boeing and Emirates announced today they have finalized a purchase agreement for 30 787 Dreamliner airplanes, valued at $8.8 billion according to list prices. The agreement, signed at the Dubai Airshow, culminates discussions between the two companies on the best 787-9 Dreamliner model to meet the requirements of one of the world’s leading airlines.

Emirates had previously signed an initial agreement for the larger 787-10 variant. In officially selecting the 787-9 today, Emirates adds a medium-sized widebody airplane to complement the airline’s larger 777 aircraft. Both airplane families lead their respective category for superior range and fuel efficiency.

HH Sheikh Ahmed bin Saeed Al Maktoum, Emirates Chairman and Chief Executive said: “I am pleased to announce a firm order for 30 Boeing Dreamliners. This is an important investment and addition to our future fleet and it reflects Emirates’ continued efforts to provide the best quality air transport services to our customers. The 787s will complement our fleet mix by expanding our operational flexibility in terms of capacity, range and deployment. We are also pleased to reaffirm our commitment to the Boeing 777X programme and look forward to its entry into service.

Sheikh Ahmed added: “Our Boeing fleet is key to our business model to serve international demand for travel to and through our Dubai hub, as we continue to contribute to the UAE’s strategy to become a global destination for business and tourism by providing high quality air connectivity.”

As part of the agreement, Emirates will update a portion of its large order book by exercising substitution rights and converting 30 777 airplanes into 30 787-9s. With this conversion, Emirates remains the world’s biggest 777X customer with 126 airplanes on order and the largest 777 operator with 155 airplanes today.

“We are excited to finalize this important order from one of the world’s leading airlines. Our agreement solidifies Emirates’ plan to operate the 787 Dreamliner and the 777X, which make up the most efficient and most capable widebody combination in the industry,” said Boeing Commercial Airplanes President & CEO Stan Deal. “It is an honor to build on our successful partnership with Emirates and continue to sustain many jobs at Boeing and our supplier partners.”

At 63 meters (206 feet), the 787-9 Dreamliner can fly 296 passengers, in a typical two-class configuration, up to 7,530 nautical miles (13,950 kilometers), while reducing fuel costs by more than 20 percent compared to previous airplanes they replace. Designed with the passenger in mind, the 787 delivers an unparalleled experience with the largest windows of any jet, large overhead bins with room for everyone’s bag, comfortable cabin air that is cleaner and more humid, and soothing LED lighting.

The Dreamliner’s superior efficiency and range have allowed airlines to open 257 new non-stop routes around the world. More than 80 customers around the world have ordered more than 1,400 Dreamliners since the program’s introduction, making it the fastest-selling widebody jet in history.