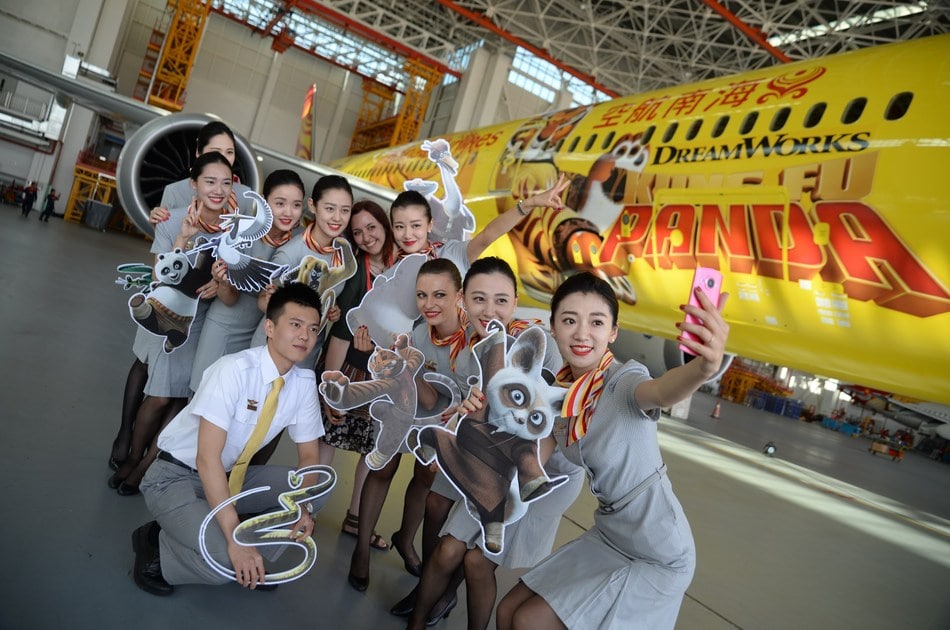 A Hainan Airlines’ Dreamliner, adorned with Po, the main character in the Kung Fu Panda film, and the famous panda’s friends, took off on the inaugural flight for its new service HU7181, from Haikou to Beijing, on the morning of May 29, 2017. As the Chinese airline’s third Boeing 787-9 Dreamliner in the fleet to receive the “King Fu Panda” makeover, the eye-catching yellow-colored airplane started its maiden flight to the cheers of the crowd.

The flight carried a special passenger, Hannah Foss, a young designer from the state of Alaska. When Hannah Foss submitted her “Kung Fu Panda”-themed Dreamliner design last September, she was one of nearly 3,000 online entries that all shared the same dream: To have their design painted on a real-life, Hainan Airlines Boeing 787 Dreamliner. That dream started several months ago when Hainan, Boeing and DreamWorks announced a partnership that would include the introduction of six specially-painted Dreamliners over the next two years, featuring characters and scenes from the popular animated franchise.

Hannah grew up in Adelaide, South Australia and moved to Alaska in 2008.    Some of her adventures include spending several years as a paleontological artist, CGI-animating a couple of museum films, constructing a 16-ft long dinosaur puppet called Snaps, eating tasty muktuk, snow-machining on the Chukchi Sea and meeting a polar bear.

In addition to having her design painted on a Dreamlinerand to be part of this amazing journey, Hannah won two round-trip, business class tickets to China, as well as a weeks’ accommodations at a luxury hotel.

The “Kung Fu Panda” story is deeply rooted in traditional Chinese culture and history. Hannah’s design wove together popular characters like Po and Tigress, with traditional Chinese “chops” and a painted sunrise. The design was awarded the top prize based on its originality, creativity, humor, its reflection of Chinese culture, and its wow factor.

When Hannah’s design is painted onto the new Dreamliner, the airplane will fly several of Hainan’s more than 40 nonstop routes between China and North America. It will join two other specially painted airplanes, the first of which touched down at Seattle-Tacoma International Airport last year. That airplane carried over 100 students and teachers from Lincoln High School in Tacoma, WA, who were returning from a life-changing, 11-day trip to China.

Hainan Airlines is proud to partner with DreamWorks and Boeing to bring the “Kung Fu Panda” franchise to Hainan’s elite service and premier experience. Look forward for more partnerships like this in the future, and be sure to keep an eye out for #TheFlyingPanda throughout our North American network!

Hainan Airlines has continued with its strategy of working hand-in-hand with the Chinese government’s One Belt, One Road initiative as part of its overall plan to aggressively expand its presence in international markets. Nevertheless, despite the complexities of operating in the highly competitive international markets, the airline has never wavered from its original set of goals of consistently combining the brand’s unique Oriental hospitality with modern service standards, a concept which is embodied in the Kung Fu Panda planes. The airline has promoted its image in the global aviation market through the cooperation with DreamWorks, demonstrating the newfound stature of Chinese companies on the world stage while allowing travelers everywhere to gain a better understanding of Chinese culture and its richness.