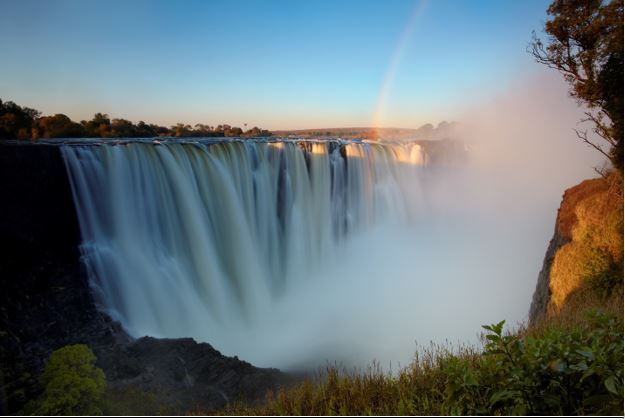 South African Airways (SAA) marked its relaunch to Victoria Falls in Zimbabwe on 14th December 2022.  The airline first commenced services to Victoria Falls in the year 2000 and returning to this route, the seventh wonder of the world was met with much excitement, celebration and ceremonial gesticulation by the community, stakeholders as well as the government of Zimbabwe.

Various dignitaries graced the opening event held at Victoria Falls International Airport including the Deputy Minister of Transport and Infrastructure Development, Acting Mayor of Victoria Falls, Resident Minister, President of the Tourism Business Council, CEO of Airports Company Zimbabwe, CEO of Zimbabwe Tourism Authority, and other government officials. The relaunch of the route was seen by various speakers as an important milestone and significant contribution by SAA towards the development of the region and the continent in terms of improving economy, tourism, and job creation.

Deputy Minister of Transport and Infrastructure Development, Honourable Mr. Mike Madiro expressed gratitude to the SAA Board, Management, and employees for returning to Victoria Falls.  Honourable Madiro said, ‘Air transportation serves as a pivotal economic driver and SAA has become a key player connecting South Africa and Zimbabwe, he added, “South African Airways is bringing the world to Victoria Falls and taking Victoria Falls to the World.”

Other key stakeholders at the inaugural ceremony at Victoria Falls International Airport agreed that connecting people for business and leisure is key to economic growth, building relationships and the development of Zimbabwe.

SAA representative at the launch event, Board Member and Chief Financial Officer, Mr Fikile Mhlontlo said, “When the airline commenced operations one of the countries SAA restarted in September 2021 with was Zimbabwe flying from Johannesburg to Harare, so relaunching Victoria Falls signals the airlines strategic intent of serving neighbouring countries including the wonderful Zimbabwe. SAA is committed in the medium to long-term easing connectivity challenges on the African continent. We are thankful and it is really heartening that SAA is seen as the national carrier of many countries in Africa. May Africa grow from strength to strength”.

South African Airways Executive Chairperson and CEO, Prof. John Lamola says, “SAA had been through an unprecedented time in its history with financial challenges culminating in the business rescue and difficulties associated with Covid19 leading to ceasing of flight operations. SAA is back and is very pleased with the positive support it is receiving from passengers and all stakeholders who wish the airline well.”

South African Airways flies to Victoria Falls six days a week. Victoria Falls remains a popular tourist destination and the airline is proud to take its customers to the magnificence of one of the World’s largest waterfalls.