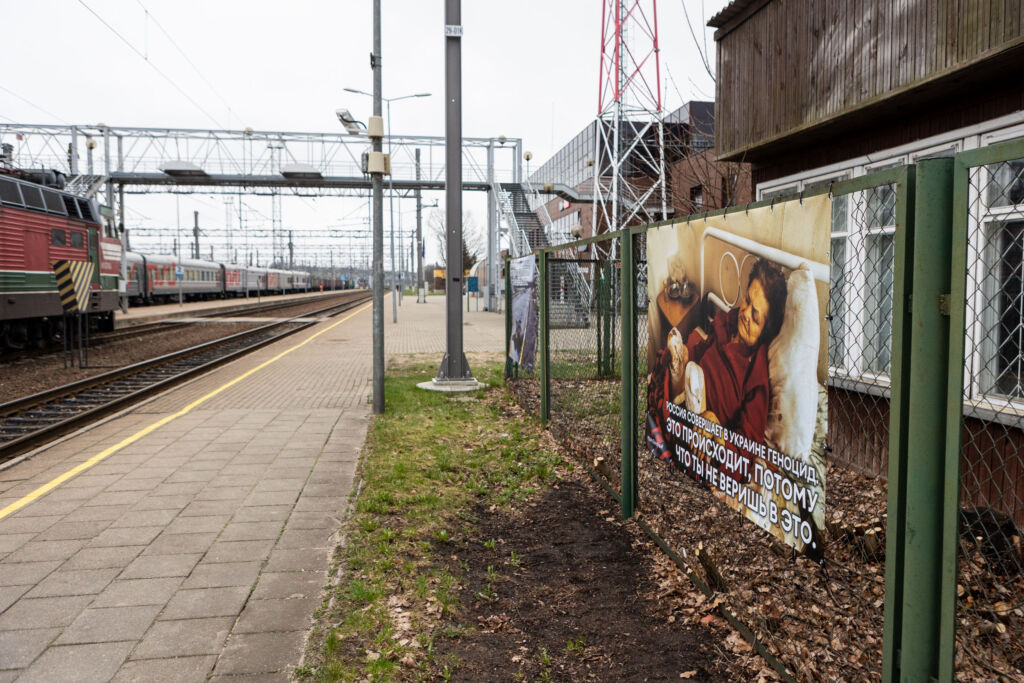 Continuing its support for Ukraine, Lietuvos Geležinkeliai (LTG), together with the Lithuanian Press Photographers’ Club, opened an exhibition of photographs illustrating the atrocities of Russia’s war against Ukraine on the platform of the Kena railway station where transit trains stop. This is the second joint initiative to draw the attention of Russian citizens travelling from Moscow or other cities to Kaliningrad to Russia’s war against Ukraine
14 photos from Bucha, Mariupol and other war-torn parts of Ukraine are on display at the Kena railway station. The photos by photographers Mila Teshaieva, Maxim Dondyuk, Evgeniy Maloletka and Mikhail Palinchak are displayed at a height where they can be seen through the windows by passengers on transit trains. The train stops at this station for about an hour.
“Since March, the images of war captured by fellow photographers, which have been circulating around the world, have been visible at Vilnius railway station to passengers from Russia in transit to the Kaliningrad region. We are joining forces to continue our symbolic support for our brothers and sisters in Ukraine by opening a second exhibition to further spread the word about Russia’s war crimes. We want to reach out to Russian citizens travelling on trains with emotional images and encourage them not to remain indifferent,” says Jonas Staselis, President of the Lithuanian Press Photographers Club.
“Russians are not even allowed to call the war in Ukraine a war: they can be jailed for it. In Lithuania, we have the opportunity to show even a small number of Russians what is really happening in Ukraine.  The exhibition previously opened on the platform in Vilnius receives different reactions from the passengers of transit trains: some take a brief look at the photos, others freeze longer at the window, and others take photos of them. Seeing the emotions, we see the meaning of continuing to encourage people not to remain indifferent and to believe in the genocide committed by Russia in Ukraine, “says Egidijus Lazauskas, CEO of LTG.
Transit trains run daily from Moscow to Kaliningrad and back. There are also transit trains from Adler and St. Petersburg to Kaliningrad and back. An average of 100 transit trains pass to and from Kaliningrad each month.
At the end of March, the first exhibition opened on the platform of Vilnius railway station where transit trains stop. It features 24 photographs from Kyiv and Mariupol, submitted by photographers Maxim Dondyuk, Evgeniy Maloletka and Mila Teshaieva.
Read Previous