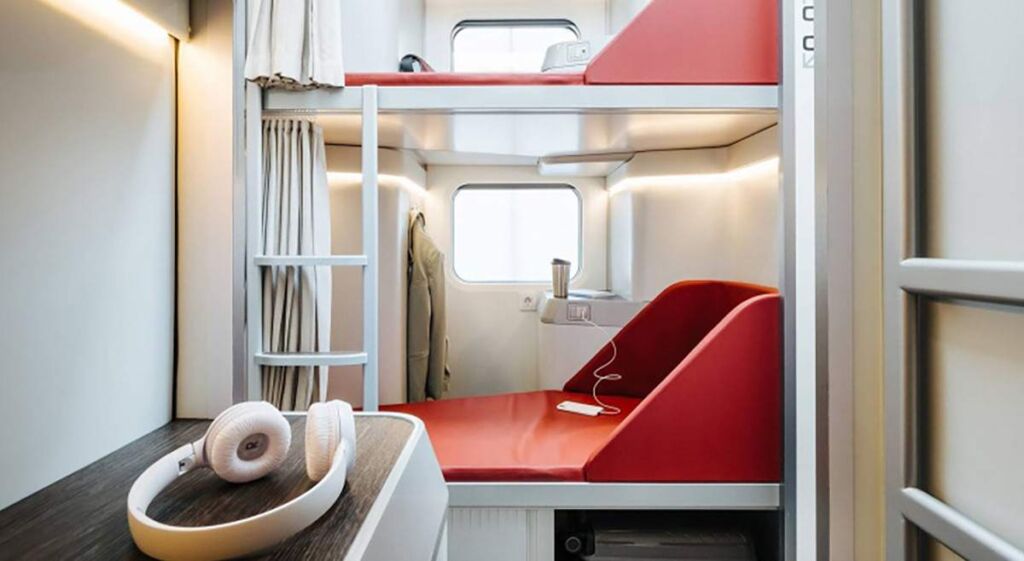 The Russian Railways and Transmashholding have presented the first concept for a capsule non-compartment passenger carriage. The presentation took place in Moscow on 11 June 2021 during the first Russian forum Travel!, which was held from 11 to 13 June at the VDNKh, Russia’s permanent Exhibition of Achievements of National Economy.

When developing the concept for the capsule car’s interior, Russian and international experience was studied and the opinions of passengers and conductors taken into account.

A distinctive feature of the presented concept is the implementation of the layout in the T dimension, which sees the width of the carriage increased by 28 cm and the length by 73 cm compared to the standard rolling stock. Each capsule has a seat/berth 15 cm longer than the usual dimensions in carriages.

Thanks to the resized salon and rearrangement of the interior space, the new carriages have more space for passengers and luggage storage.

The new concept accommodates 56 individual capsule places, 28 at the bottom and 28 on the top. The capsules are located along the central aisle and separated from the passenger compartment by an opaque curtain which prevents most light from passing through.

For passenger convenience, the sleeping area is surrounded by an ergonomically shaped backrest in the form of an armchair. Passengers can sit comfortably and use the adjacent table, which also has recesses to hold glasses. USB sockets and light switches are provided on the side surface, between the back and the tabletop.

The lighting concept was created specifically for the capsule car variant. The curtain rods have built-in contour lighting and a number of brighter diodes that act as individual light. Passengers can use both options at the same time or separately.

Between the table and the wall at the passenger’s feet is a wide space where travellers can put their personal belongings or small luggage.

A feature of the Russian Railways concept is also a variable luggage storage system located under the lower capsule or in a special luggage compartment in the carriage.

Particular attention has been paid to hygiene issues. A water and air disinfection system is installed in the carriage and there are contactless taps, soap dispensers, hand dryers. Antibacterial materials are used in interior decoration.

The new version of the capsule car concept also includes a vending area. A separate waste collection system is provided.