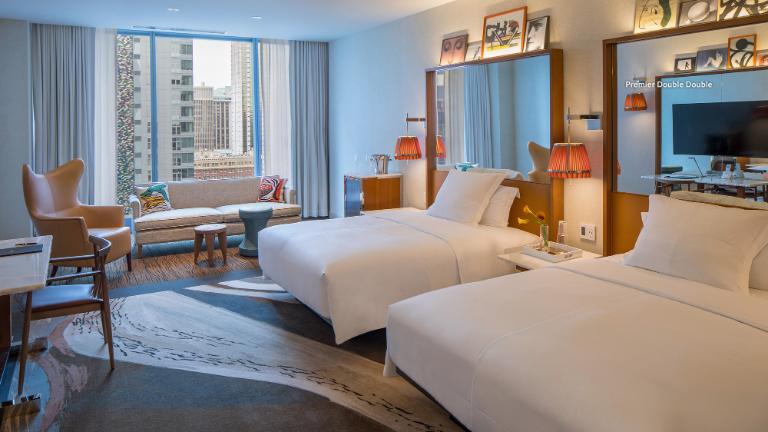 LOTTE Hotel opened the chain’s 12th international hotel and third in the U.S. in Seattle on Sept. 24. Following the successful opening of LOTTE New York Palace, LOTTE Hotel Seattle has set out to become a top-echelon hotel in the U.S.

LOTTE Hotels & Resorts, whose global expansion marks its 10th year since the opening of LOTTE Hotel Moscow in September 2010, now operates 12 international chain hotels in seven countries, including the United States, Vietnam, and Russia. This demonstrates the company has pushed for aggressive global expansion, opening at least one international chain hotel each year.

Located on Fifth Ave., LOTTE Hotel Seattle has a total of 189 rooms (including 33 suites) on the first to 16th floor of its 44-story building. Guest rooms feature creative and modern designs inspired by Seattle’s natural landscape and offer a lively and bright atmosphere. Guests can enjoy a view of both the ocean and dynamic cityscape of Seattle from the entire glass window wall in their room.

There are 15 meeting rooms and banquet halls for every occasion.  The Sanctuary Grand Ballroom has been renovated with a beautiful stained-glass interior space decorated with antiques and thousands of organ pipes.  The Sanctuary is America’s first United Methodist Church.

David H.S Kim, CEO of LOTTE Hotel said, “We will further enhance the reputation of our Korean hotel brand by working with pride as a representative hotel brand of Korea and extending Korean-style services that impress the guest.”

Some of those services include mobile check-in, welcome drink, fragrance service and valet service where a full interior detail is available for guests’ vehicles.

United to Increase Service on Caribbean and Mexican Beach Routes