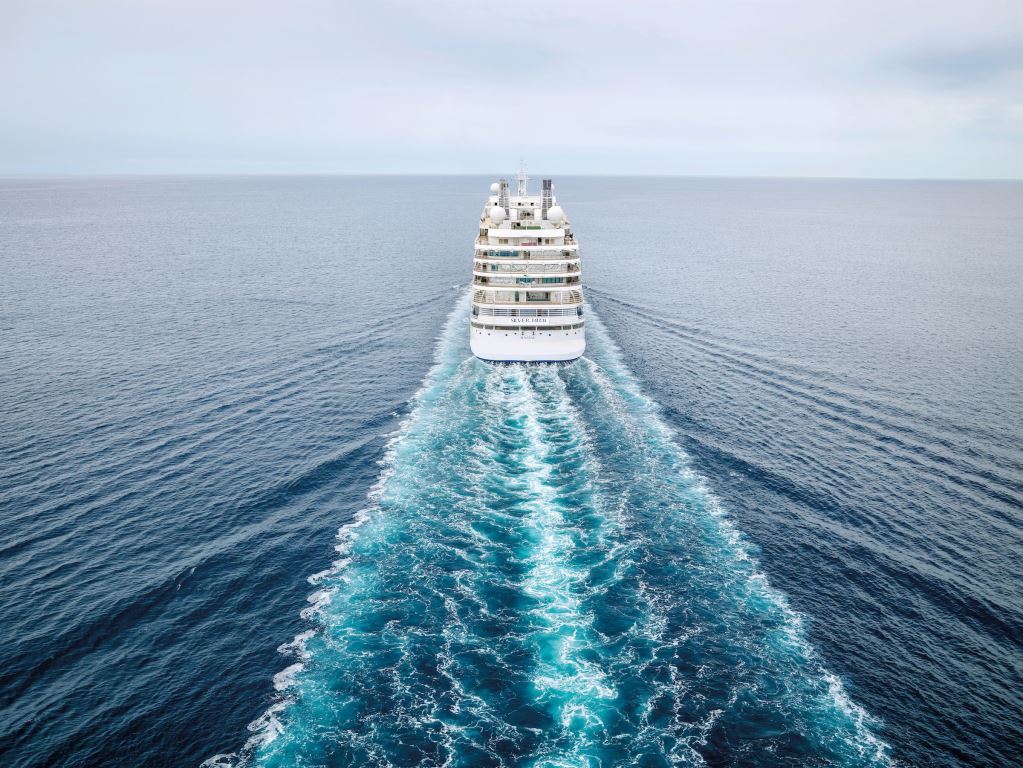 Silversea’s new ship Silver Moon is one step closer to welcoming the cruise line’s guests, having successfully carried out her sea trials between August 8th and August 20th. Carrying a reduced crew of approximately 320 due to precautionary health protocols, the ship journeyed between Fincantieri’s shipyards in Ancona and Trieste, Italy, undergoing a week-long dry-dock period in the latter. With a delivery date set for October 30th, Silver Moon will become the second ship to join Silversea’s ultra-luxury fleet in 2020, following the delivery of Silver Origin on June 3.

Silversea’s senior officers, external engineers, and representatives from both Fincantieri and the Royal Caribbean Group put Silver Moon through a series of preliminary tests in the Adriatic Sea – including noise, and vibration tests – for three days from August 8th. Once Silver Moon was out of the water in Trieste, stability tests were performed; public spaces were inspected; and engineers applied the finishing touches to the ship’s exterior, including the cleaning and painting of the hull, and the polishing of the ship’s brass propellers. Secondary tests, including speed tests, were then carried out on the return sailing from Trieste to Ancona. Work has now recommenced on the ship’s interior, ahead of the vessel’s official delivery in October.

The sister ship of Silversea’s Silver Muse, Silver Moon represents the latest accomplishment in the cruise line’s long-standing partnership with the illustrious shipbuilder Fincantieri. During the peak months of Silver Moon’s construction in Ancona, over 1,000 skilled professionals were working on the ship simultaneously, with over 390 companies contributing to the build. Painted using almost 100,000L of paint, over 15,000 steel plates and profiles were cut to form the ship’s superstructure – 920t of which were transported from 755nm away. Approximately 1,690,000m of electric cable were installed by 18 contractors, as well as 60,000m2 of insulation, 450,000kg of air conditioning ducts, and 92,000kg of ventilation ducts. Moreover, over 5,000 automation channels have been installed to link the ship’s mechanisms.

With over 20 years of experience at Silversea Cruises alone, Captain Alessandro Zanello was at the helm for the launch of Silver Moon’s sister ship, Silver Muse, back in 2017, and was also present for the sea trials of Silver Spirit in 2009.

“As my third with Silversea, I must say that Silver Moon’s sea trials felt a little surreal after everything that happened in the months prior,” says Zanello. “I was originally scheduled to travel to the shipyard in Ancona in April. I was with family in Canada at the time. Unfortunately there were no flights from Canada to Ancona, so I was unable to reach the ship until July. The sea trials themselves felt special, indeed, and were held in unique circumstances. Enhanced health and safety protocols were in place, including temperature screenings, physical distancing, and the wearing of face coverings both on the ship and in the shipyard. Meal hours were extended and we ate with fewer people in the restaurant. During the sea trials themselves, we had far fewer people on board than for those of Silver Muse. Safety was the primary concern. Nevertheless, we managed to carry out all test successfully. I must admit, sea trials can often be stressful, with too many people on the bridge; it was quite pleasant to have a more tranquil environment. Perhaps we will be forced to review our processes going forwards – this could be a positive thing. At the end of the sea trials, we shared a celebratory glass of prosecco with the team from Fincantieri. The ship is coming on nicely and she really is looking spectacular. This is a momentous occasion for all of us; we have worked very hard to reach this point. One of the most special moments for me was going into the dock to see the ship’s hull, before and after the painting. A small tradition of mine: I like to take a photo in front of the bulbous bow, when a fresh coat of paint glistens on the hull.”

Promoted to the position of Chief Engineer aboard Silver Spirit in 2017, Guido Capurro participated in his first sea trials with Silversea aboard Silver Moon.Not only is Capurro responsible for the operation of the ship’s main and auxiliary engines, but he also directs the onboard technical department, with responsibilities that include air conditioning, plumbing, lifeboat engines, and launching apparatus.

“While all essential technicians from Silversea and Fincantieri were able to attend the sea trials, some external engineers were unable to fly and so could not be present. Approximately half the number of people were on board compared to regular sea trials. Nevertheless, we were able to carry out all tests successfully. These were my first sea trials with Silversea and it is always spectacular to see the ship at its peak performance, and to see how the automation and safety devices react to the sudden change in demand. Everything went really well and the ship’s responses exceeded expectations. I was thrilled to see the ship’s propellers out of the water once again, as they were polished during the dry-docking period in Trieste. The better they are polished, the better the ship’s performance. The hull was painted with a special antifouling with a very low roughness, which is an important task in optimizing the performance of the ship.”

The son of a Captain, Hotel Director Paolo Percivale proudly participated in the launch of both Silver Spirit in 2009 and Silver Muse in 2017, before bringing his expertise aboard Silver Moon. As Hotel Director, he will oversee the entire hotel operation on board, managing a team of over 350 crewmembers to deliver exceptional service to Silversea’s guests.

“Just 10 days after we joined the shipyard at the beginning of March, the lockdown was implemented and everything came to a halt. We lived through the lockdown in Ancona. Guido and I, along with several other members of the team, were working from apartments in the city until the end of April, which was very difficult. After a spell back home once the lockdown ended, I returned to the shipyard on July 1st. It’s great to finally see Silver Moon nearing completion and to experience the various enhancements we have made from Silver Muse. In the Dolce Vita Lounge, for example, a beautiful bar has been installed as the space’s focal point, while La Dame Restaurant has been enriched with hand-crafted Lalique crystal panels. All public areas and suites are looking remarkable – I just can’t wait to welcome our guests on board, enjoying these new atmospheric venues. I am especially excited to see the reactions of our guests to our inspiring new S.A.L.T. programme, and our new S.A.L.T. venues, which is sure to be more than positive. She is a beautiful vessel, indeed.”

“Silver Moon successfully passed her sea trials and we are now nearing the ship’s delivery,” says Giovanni Stecconi, Director of Fincantieri’s Ancona shipyard. “We look forward to celebrating that momentous occasion together with Silversea, a cruise line whose growth we have contributed to with pride and determination, thanks to ambitious projects such as the ‘Muse’ class, of which Silver Moon is a part.”

“Silver Moon will be an innovative addition to our expanding fleet of ultra-luxury ships,” says Roberto Martinoli, Silversea’s President and CEO. “Building on the success of our beloved flagship Silver Muse, Silver Moon will push boundaries in travel to unlock meaningful experiences for our guests around the world. Our pioneering new S.A.L.T. programme is just one way in which travellers will delve deep into destinations, and I look forward to personally welcoming our guests aboard Silver Moon in the near future. I extend my gratitude to the entire team at Fincantieri, who have demonstrates their skill and know-how; Captain Zanello and his officers, who have worked tirelessly; Silversea’s committed shoreside team for their enduring professionalism; and our colleagues at the Royal Caribbean Group, who continue to strengthen our cruise line with their invaluable support. The fact that our beautiful Silver Moon nears completion, despite such challenging circumstances, is a testament to the exceptional resilience and expertise of all involved in her build. For this I am very proud.”