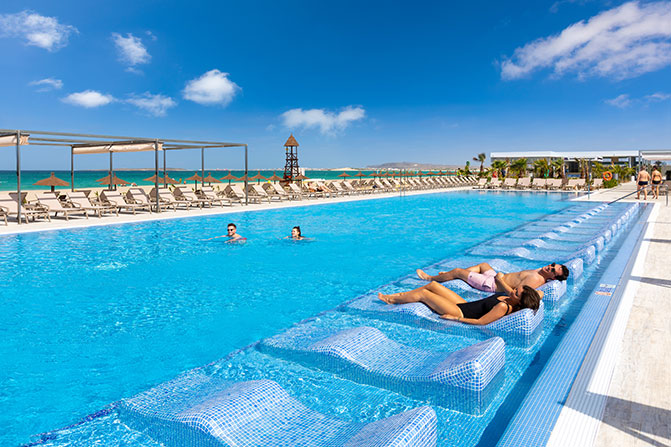 RIU Reopens in All Its Destinations in Spain

Following the international tourism hiatus caused by COVID-19, RIU Hotels in Spain is gradually taking up operations again. In Spain, the chain has scheduled the opening of 15 hotels in all the destinations where it is represented, which are: Madrid, Mallorca, Formentera, Cádiz, Málaga, Gran Canaria, Tenerife, Fuerteventura and Lanzarote. The hotels will open between 15 June and the first week of July. RIU is implementing strict safety and cleaning protocols to protect the health of guests and staff, and it trusts that customers will choose to enjoy their summer holidays again in their favourite destinations.

The first hotels in Spain to open are the Riu Bravo and Riu Concordia hotels in Playa de Palma, Mallorca. They are working in partnership with the Balearic Government and RIU’s partner, TUI, to carry out the safe tourism test that started on the island on 15 June. Riu Plaza España in the centre of Madrid opened on the same day.

In the Canary Islands, the first hotel to welcome back its guests will be Riu Gran Canaria, located in the south of the island. It opens on 19 June, along with two of the chain’s hotels in Andalusia, Riu Chiclana and Riu Costa del Sol, as well as Riu La Mola in Playa de Migjorn on Formentera.

On 26 June, they will be joined by the Riu Palace Meloneras and Riu Palace Tres Islas hotels, located on Gran Canaria and Fuerteventura respectively, while 1 July is the scheduled date to reopen the Riu Calypso hotel, also on Fuerteventura, and Riu Paraiso Lanzarote. The following day, Tenerife will return to action with the opening of Riu Palace Tenerife, shortly followed by Riu Palace Palmeras (Gran Canaria), Riu Arecas (Tenerife) and Riu Nautilus (Torremolinos).

In this way, RIU is starting to offer its national and international customers access to all its Spanish destinations once more, by opening at least one hotel in each of them. The chain has also reopened operations in a total of 15 more countries, with hotels open or about to open in: Germany, Mexico, United States, Bulgaria, Portugal, Ireland, Jamaica, Costa Rica, Aruba, the Dominican Republic, the Bahamas, Morocco, Zanzibar and Sri Lanka.

All the reopening hotels will strictly follow the 17 safety protocols set out in the RIU Manual for Post-COVID Hotels. RIU has written this guide in partnership with the consultant Preverisk, and it offers the highest possible level of guarantee for the health and safety of customers and staff.

The RIU Hotels & Resorts chain presents RIU Protect, a new service for its customers that provides medical assistance to its guests, including any affected by COVID-19 infection during their holidays.