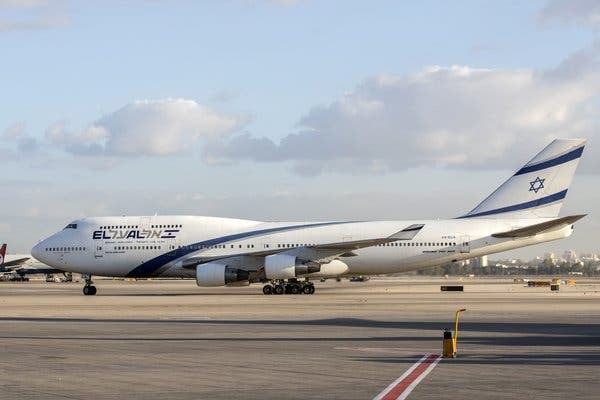 After 48 years, during which EL AL has flown many Boeing 747 models, the last 747-400, bearing the code 4X-ELC, completed its final flight for the airline

Over the years, approximately 20 747 aircraft of various models entered and were retired from EL AL service

EL AL CEO Gonen Usishkin: “This is a special, historic day. After 48 years of service with EL AL, the legendary Jumbo, the Boeing 747, which served the airline’s customers loyally, touched down at Ben Gurion Airport for the last time. Now, EL AL is looking ahead towards continued renewal with our new 787 Dreamliners. Four additional 787 aircraft will rapidly join the 12 new Dreamliner aircraft in service. Moreover, we have been upgrading the interiors of the 737 fleet for the comfort of our passengers and will do the same for our 777 aircraft in the future.”

Captain Yonatan Gat, ELAL Manager 747 fleet: “It is a great honor for me to pilot the EL AL Jumbo’s final commercial flight, officially ending an impressive 48-year period of service with EL AL. The Jumbo clearly earned its title as “Queen of the Skies.”

Over the years, about 20 747s of various models entered and were retired from service. Last Friday, a special flight – the last commercial flight – of the 747-400 took off from Tel Aviv to Rome. Members of EL AL’s Matmid Club were invited to purchase tickets at a special price in points and to take part in this historic event.

Before taking off, a festive event was held near the plane’s departure gate that included an exhibit documenting high points of the 747 fleet, among them important moments in Israel’s history.

During the return flight from Rome, which took off at 10am (Rome local time) and landed at Ben Gurion Airport in the afternoon, EL AL attendants, wore the airline’s retro orange uniforms.

To mark the historic event, shortly before landing at Ben Gurion, the captain changed the flight path and “sky painted” a Boeing 747 plane in the Mediterranean skies that could be viewed live throughout the world on flightradar24.com.

The popular 747, known as “The Queen of the Skies,” began to fly the blue and white colors of EL AL in May 1971. The aircraft livery, designed specially by renowned Israeli artist Dan Reisinger, continued to adorn the aircraft for more than 30 years.

With the introduction of the 747 fleet, a new hangar was built to accommodate the plane’s dimensions. Its roof area covered 10 dunams (approximately 2.5 acres). During that period, the structure was thought to be the largest, in terms of volume, in the entire Middle East. The new planes also included EL AL’s first-ever inflight entertainment systems with a wide selection of new films, audio programs and music stations.

The 747 fleet was involved in several important landmark events in the history of the state, among them keeping the air links open to and from Israel during the Yom Kippur War, flying pilots and maintenance personnel home from abroad to join their IDF units, and transferring essential supplies and equipment for the protection of the state. In addition, the fleet played an important part in Operation Exodus, which transported Jews to Israel from the former Soviet Union in nonstop flights from Moscow, and in Operation Solomon, which airlifted Ethiopian Jews at the beginning of the 1990s. As part of that operation, one EL AL 747 set a Guinness world record by carrying 1,088 passengers, including two infants who were born during the flight.

In 1979, EL AL inaugurated its flagship nonstop flight, LY001 from Tel Aviv to New York, on 747 aircraft. Passengers quickly fell in love with this flight because it offered a full night’s sleep from takeoff in Tel Aviv at 1am to landing, 12 hours later, at 6am local time in New York.

The 747-400 aircraft could fly up to 13,350 km, enabling EL AL to offer nonstop flights between Los Angeles and Tel Aviv.

With the purchase of new aircraft, EL AL added nonstop flights from Tel Aviv to three main cities in the US in 1994: Newark (New Jersey), Miami and Los Angeles. Tel Aviv-Los Angeles became the airline’s longest route, and when it began flights, it was the longest in the world at 12,000 km. Average flight time was 14 hours and 30 minutes.

Over the years, 747 aircraft were used on nonstop flight routes that linked Israel with the Diaspora. These aircraft were the first to open routes to the Far East and to other destinations in North America, Asia and Europe.

As part of EL AL’s ongoing renewal program, the airline has purchased 16 new 787 Dreamliner aircraft, which replaced the 767 fleet that was retired at the beginning of the year, and the 747 aircraft that are leaving service now.

Holland America Cruise Line to Launch Ryndam in May 2021