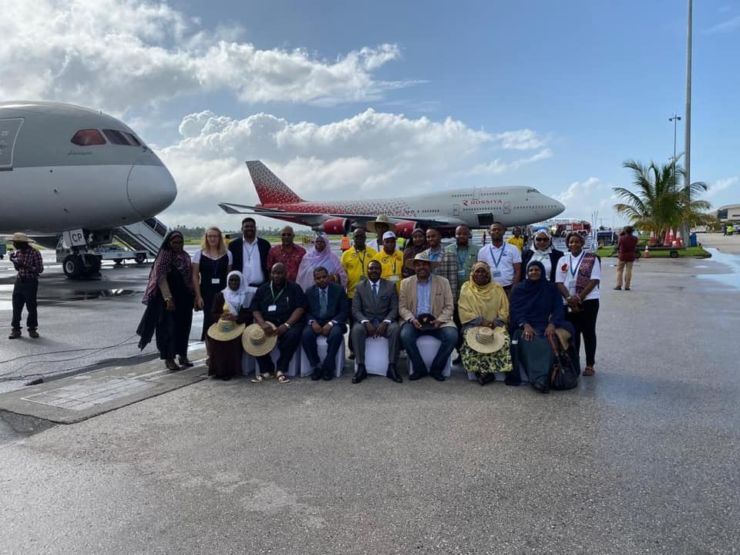 Zanzibar, Tanzania is now receiving a weekly flight from Moscow Vnukovo throughout the European winter season, operated with a Boeing B747 of Rossiya Airlines.

Flights from Moscow to Zanzibar will be operated one a week on Saturdays from Russia and on Sundays from Tanzania.

On the inaugural flight were over 500 passengers and after receiving the traditional water cannon salute was it all hands on deck for immigration and customs but also for baggage handling services to process this unprecedented number of visitors arriving at once.

The flight was officially welcomed by a delegation comprising Zanzibar government officials – led by the Minister of State in the President’s Office Hon. ISSA Haji Ussi and Hon. Mahmoud Thabit Kombo, the Minister responsible for Information, Tourism and Heritage – and Russian embassy officials and leading tourism stakeholders from Zanzibar.

It is estimated that this operation, due to take place year-round, could bring as many as 25.000 Russian tourists to the ‘Spice Island‘.

Said Javed Jafferji on his social media pages: ‘The arrival of this Russian Flight is a testimony of Zanzibar’s government focus on raising the Tourism Standards of Zanzibar globally, as a major contributor to the economy of Zanzibar which has surpassed all the set targets in the Tourism sector. With this weekly flight of 525, it’s expected to reach 25,000 Tourist a year directly from Russia and economy of 15bn into the Zanzibar economy Today marked the inaugural flight of Russian airlines, celebrating the first charter flight from Moscow which landed in Zanzibar‘.