The Russia & CIS Hotel Investment Conference (RHIC) will be held in Sochi, Russia, from October 22-23 at the Radisson Blue Resort & Congress Centre, and focus on Russia’s investment and development outlook. It will feature discussions by government officials and tourism executives on how the industry can leverage infrastructure improvements made for the Olympic Winter Games in 2014 to create a legacy for Sochi, the Krasnodar region and Russia as a whole. 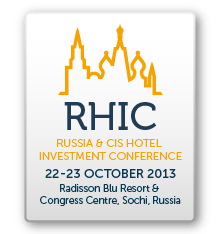 Russia remains an attractive proposition to investors with many development opportunities for the international hotel community. The number of hotels in Russia, the Commonwealth of Independent States and Georgia grew by 10 percent last year alone, with 65 percent of new hotels opening in Kiev, Baku and Sochi, according to the annual HVS Trends & Opportunities Report. A further 6,400 hotel rooms are scheduled to be built in Moscow by 2018, a growth of 37 percent. During the same period, St. Petersburg and Sochi will increase their room stock by 1,260 rooms (18 percent) and 3,800 rooms (22 percent), respectively.

“This year’s program has a focus on investment opportunities and notably the legacy from hosting the Winter Olympics and the government’s drive to improve infrastructure,” said Jonathan Worsley, chairman of Bench Events, co-organiser of RHIC. “The Krasnodar Regional Administration is taking a leading role with us on this important industry event, with the support of the Mayor of Sochi, the Head of the Federal Agency for Russian Tourism and the Minister of Investment & Innovation from the Moscow region.”

More than 400 industry leaders are expected to participate at RHIC this year, which will be held at the Radisson Blu Resort & Congress Centre in Sochi.