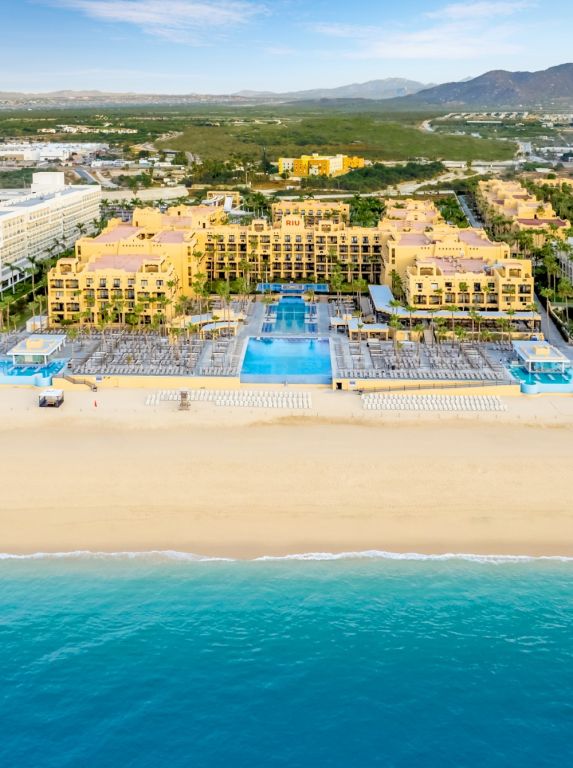 RIU Hotels & Resorts presents the renovation of one of its three hotels in the Los Cabos area of Mexico: Riu Santa Fe. The hotel had been expanded in 2018 when the Riu Pool Party area and Splash Water World were built, and was fully renovated this year. Riu Santa Fe is a 24-hour All-Inclusive hotel in the Fun 4 All class and thus complements the offerings in Baja California Sur where RIU also has the Riu Palace Cabo San Lucas and the Adults-Only Riu Palace Baja California. The hotel’s reopening is the cherry on top of RIU’s 25th anniversary in Mexico.

The five-star Riu Santa Fe has 1288 rooms spread throughout various buildings and streets emulating a charming Mexican village thanks to their characteristic architecture and picturesque central plaza. Except those built during the 2018 expansion, all rooms have been refurbished following the modern design and simple lines characteristic of the Majorcan hotel chain’s renovations. The renovated rooms offer the elegance of wooden furniture combined with blue-toned décor, imbuing them with a cosy warmth.

The reception desk has been fully renovated, offering a fresh, modern image, where the colour white and natural light catch the eye. The current lobby is spacious and facilitates easy flow of guests. Adding to that flow is the fact that the check-in and check-out areas of reception are separate. An additional reception desk with concierge was added to prevent guests from that area having to go to the main reception desk.

The hotel has expanded the dining options available to guests: the Kulinarium restaurant, with gourmet cuisine a la carte; two Tiki Taco stations; and two Pepe’s Foods in total, as one more has opened in addition to the previously existing traditional grill restaurant. The main Baja California restaurant remains in operation, serving buffet breakfasts and dinners, the restaurant Lio, open during the Riu pool Parties; as well as the themed restaurants Carusso (Italian) and Sakura (Asian), and La Misión (Mexican) and Torote (steakhouse) located next to the main pools.

Customers will also be able to enjoy the hotel’s 13 bars: La Monumental bar and lounge; bars Plaza Olé and Bravo; bar Felipe; the 24-hour Sports Bar; the Wet & Drink, in the water park area; swim up bars la Iguana, Tequila, Mezcal and Mezcalito, the latter having just opened. El Ushuaia, Privilege and Space are in the Riu Pool Party area so they are open only for pool parties.

The Riu Santa Fe has an extensive entertainment programme. The little ones in the family can relish in the kids club RiuLand. Guests can also enjoy wellness services from the Renova Spa, with a beauty salon, hair salon and massage parlour, as well as Splash Water World waterpark.

Club Pacha is responsible for livening up guests’ nights, along with Riu Parties, a concept born in this hotel in 2018. Parties take place four times per week in the Riu Pool Party area. Jungle and Pink Parties will delight partygoers in the evenings while nighttime parties will have the themes of White and Neon. Guests at the other two establishments in the area can attend these parties and go to the waterpark at no additional cost as they are all part of the hotel’s 24-hour All-Inclusive programme.