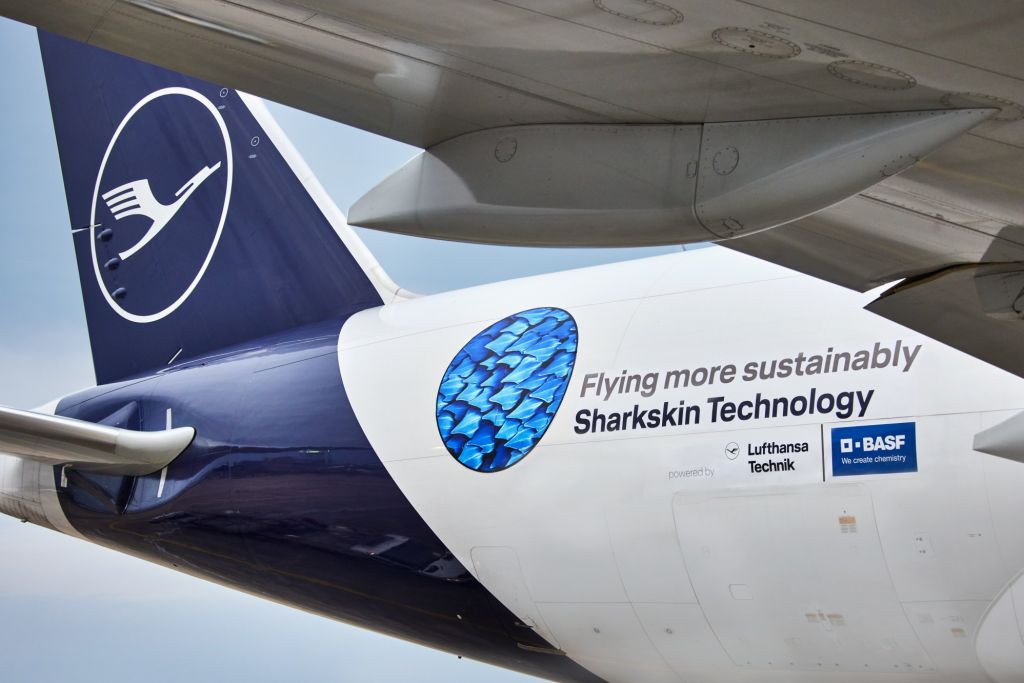 Following nature’s example, Lufthansa Technik and BASF have jointly developed the functional surface film AeroSHARK for commercial aircraft. The film is modeled on the microscopic structure of shark skin and is applied to the aircraft’s outer skin. It directly reduces aircraft drag, and cuts kerosene consumption and thus CO₂ emissions. The Lufthansa Group will be the first airline group in the world to equip more than 20 long-haul aircraft in its fleet with aerodynamic sharkskin film. Following extensive testing and a certification process lasting several months, the European Union Aviation Safety Agency (EASA) has now granted Lufthansa Technik a Supplemental Type Certificate (STC) for the series application of this technology on two Boeing 777 models.

SWISS is to become the first passenger airline in the world to take advantage of the new AeroSHARK aircraft skin technology to further reduce the carbon dioxide emissions and the fuel consumption of its flight operations.

In the future, all twelve long-haul B777-300ER aircraft at SWISS will fly with the fuel-saving surface technology. The same applies to Lufthansa Cargo’s current fleet of eleven Boeing 777F freighters. The first SWISS aircraft equipped with AeroSHARK (registration HB-JNH) has already been in scheduled service since October. This aircraft had also completed the flight test program for the certification it has now received. In January 2023, the next Boeing 777 aircraft in Frankfurt and Zurich are scheduled to be modified with the riblet films.

“For a more sustainable future in aviation, we are consistently driving change in our industry. Our ambitious goal: a neutral CO₂ balance by 2050. Already by 2030, we want to halve our net CO₂ emissions compared to 2019. With the broad rollout of the AeroSHARK surface technology developed by Lufthansa Technik together with BASF, we are once again underlining our innovation leadership. We are the first airline group worldwide to use this new technology,” said Christina Foerster, Member of the Lufthansa Group’s Executive Board, responsible for Brand and Sustainability. “By covering more than 20 aircraft with the new sharkskin film, we will reduce the Lufthansa Group’s CO₂ footprint by more than 25,000 tons annually.” 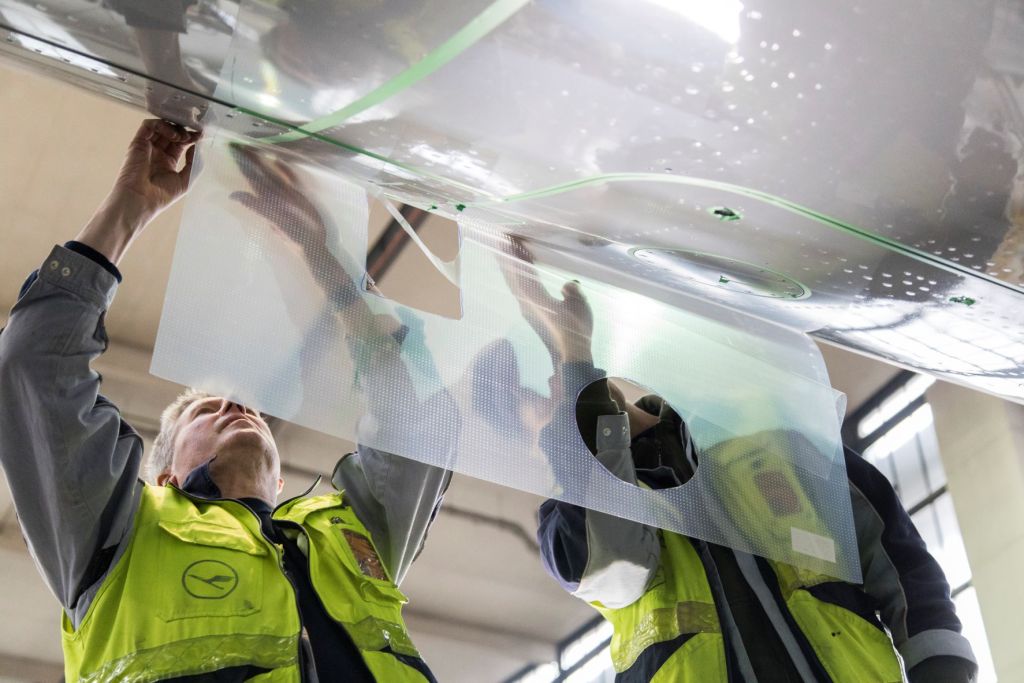 AeroSHARK consists of millions of ribs around 50 micrometers in size, known as riblets. They imitate the properties of sharkskin and thus optimize aerodynamics at flow-relevant points of the aircraft such as the fuselage or the engine nacelles. As a result, less fuel is required. By covering 950 square meters of a Boeing 777-300ER’s outer skin, for example, annual savings of around 400 tons of kerosene and more than 1,200 tons of CO₂ can be achieved.

A clear strategy for a sustainable future

The Lufthansa Group assumes responsibility for effective climate protection with a clearly defined path toward CO2 neutrality: By 2030, the company’s own net CO2 emissions are to be halved compared to 2019, and by 2050, the Lufthansa Group wants to achieve a neutral CO2 balance. To this end, the company relies on accelerated fleet modernization, the continuous optimization of flight operations, the use of sustainable aviation fuels and innovative offers for its customers to make a flight CO2-neutral.