LOT Polish Airlines launches new connections from Warsaw. On board the national carrier’s aircraft we will fly to the largest city in the Caucasus – Baku. The connection is of particular business value, as Azerbaijan has been an important economic partner of Poland for years.

The summer flight network of LOT Polish Airlines includes many new destinations, including the capital of Azerbaijan. The first Boeing 737 to Baku will take off on Friday, May 27 at 23.00. The flight from Chopin Airport to Baku’s Heydar Aliyev Airport will take 4 hours.

–  This year, we celebrate the 30th anniversary of the establishment of diplomatic relations with Azerbaijan. I am all the more pleased to announce the launch of the route to Baku. I firmly believe that direct connection will contribute to the further promotion of Polish heritage in Azerbaijan and the strengthening of relations between the two countries. And the legacy of Polish architects in Azerbaijan, in turn, with its beautiful monuments, will enchant tourists from Poland. You are welcome on board! – Rafał Milczarski, President of the Management Board, LOT Polish Airlines, said.

The national carrier will fly to the capital of Azerbaijan for the first time. The flights are now available for purchase in the booking systems. The route will be operated on Tuesdays, Wednesdays, Fridays and Saturdays. During the four-hour flight, passengers flying business class will enjoy meals from cuisines from around the world. A sweet surprise with an Azerbaijani twist awaits passengers on the inaugural flight.

Situated on the Caspian Sea, Baku is dubbed a city of contrasts. Its landscape is studded with futuristic skyscrapers that adjoin traditional buildings. The old town of Baku surprises with medinas well-known from Morocco, as well as cosy, narrow streets reminiscent of those in Istanbul. On the other hand, a permanent element in the city’s audio-visual landscape is the strong wind. Even the name of the Azerbaijani capital means “a wind blow”. Moving just a few dozen kilometres away from Baku, we come out to meet another element. Yanar Dağ Hill is famous for its ever-burning fire. And all thanks to the vast deposits of oil and natural gas hidden deep inside practically the entire area of the Absheron Peninsula.

Baku is therefore not only a thrilling city, harbouring gems of architecture, but also a great starting point for exploring places
where nature plays first fiddle.

Tickets for flights from Warsaw to Baku are already available via all sales channels, including the lot.com website, LOT Contact Center and LOT Travel offices. 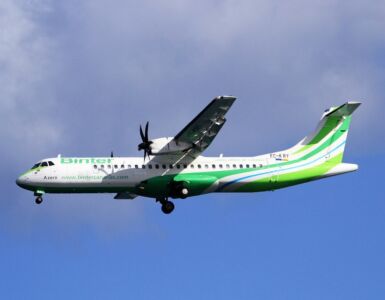 Binter inaugurate its new international route, which plans to connect Florence (FLR) and the Canary Islands once a week, via Gran Canaria. The journey is 4 and a quarter hours. The inaugural flight took off on 2 July...