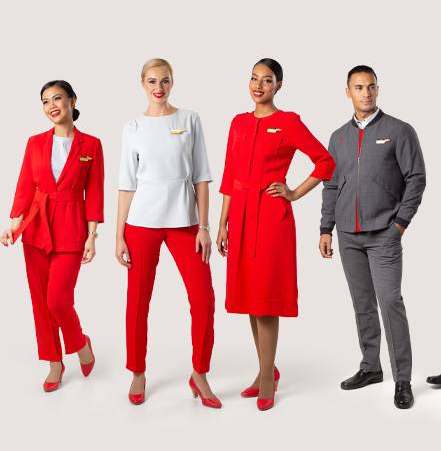 Air Arabia is celebrating 18 years of successful operations, to mark the milestone, the airline has unveiled a new uniform, which reflects the carrier’s modernity and youthfulness. The new design will be worn by Air Arabia’s staff across its network and all operating hubs, including pilots, cabin crew, engineering and maintenance, as well as members of airport, ground operations and sales shops.

A bold cherry red as the hero color for women’s wear while the new cuts and detail adds a touch of modernity. The male color scheme encompasses silver, grey and dark charcoal representing professionalism and approachability. Function is critical; therefore, practicality and effectiveness were fused with form to imagine a uniform that combines refined silhouettes with a wearer experience that is effortless and efficient.

In line with its commitment to environmental and sustainable practices, Air Arabia has partnered with the ISO certified YES Full Circle Solutions, a leading platform that supports people and organisations to become global sustainability champions, to help recycle the old uniform in the best environmental and socially responsible way.

Air Arabia has reported strong and sustained growth since the launch of its first flight when the carrier introduced a new way of taking flight across the Arab world. From the earliest days of serving just five routes with two aircraft, the airline has grown to serving over 170 routes from multiple hubs spread across the UAE, Morocco and Egypt, served by an aircraft fleet of new Airbus A320 and A321 aircraft, with plans for further expansion in 2022. Air Arabia Group has evolved to become a leading publicly listed company constantly creating value for its customers and all stakeholders.