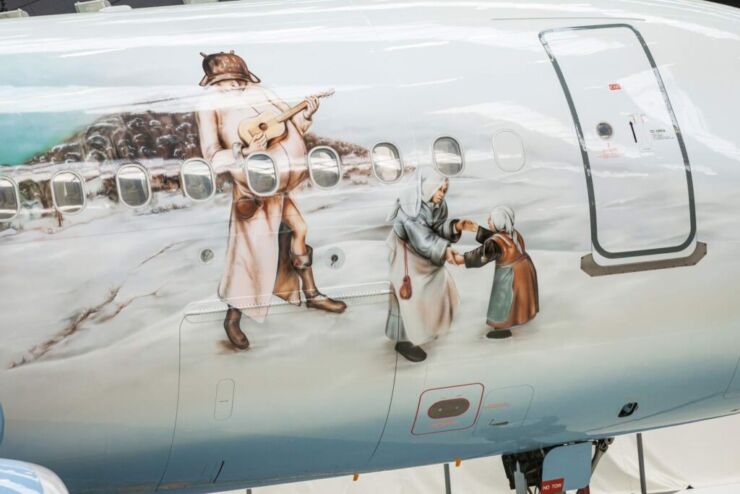 Six years ago, Brussels Airlines launched its first Belgian Icon with a single hand-painted aircraft carrying a never-seen before livery. Together with Moulinsart, the airline created Rackham, an aircraft livery dedicated to the world famous Belgian cartoon character Tintin, covered in a 37m long black shark based on the original drawing by the hand of Hergé. The Belgian Icon series is one of many ways how the airline wants to show ambassadorship for its country. The airline will continue to bring the best of Belgium to the world.

As Rackham – which is still one of the most photographed planes in the world – has reached its repainting deadline, Moulinsart and Brussels Airlines agreed to prolong their partnership and restore the aircraft painting in its original state, meaning that Rackham will stay in the airline’s fleet for at least 5 more years. While the painting on the outside remains almost identical, the interior of the aircraft will be upgraded with more Tintin illustrations by the hand of Hergé. With the renewal of its first Belgian Icon, Brussels Airlines confirms its continued ambassadorship for Belgium. Moreover, the airline aims at always counting at least five Belgian Icons in its fleet.

Moulinsart studio, who adapted the original drawings to the unusual curves of an Airbus A320, will follow up on the repainting of Rackham’s fuselage together with Brussels Airlines’ Maintenance department. The restoration of the painting and adaptations of the interior is expected to be finished in June 2021.

After Rackham in 2015, the airline welcomed two special liveries in 2016: Magritte and Trident, dedicated to the Red Devils, Belgium’s national soccer team. One year later Amare, a tribute to the music festival Tomorrowland, joined the fleet, followed by Aerosmurf and Bruegel in 2018 and 2019 respectively.

While Rackham will be restored in its original state, OO-SNC, the aircraft that carried the Magritte livery for five years, is being transformed into an aircraft wearing the Star Alliance logo/colors, the world’s leading airline alliance Brussels Airlines is member of since December 2009. After 6,403 flights and 8,371,324 flown kilometers, Brussels Airlines waves Magritte goodbye. In the past 5 years, 866,331 passengers got the chance to fly the beautiful aircraft covered with the famous clouds and birds taken from three of René Magritte’s paintings.

Trident on the other hand remains dedicated to one of Belgium’s most popular sports: soccer. The popular livery will receive a partial repaint on the outside as well as an updated interior. As of 25May 2021, the aircraft with registration number OO-SNA will fly around with portraits of both the Red Devils and the Red Flames on the inside until it leaves the Brussels Airlines fleet in November 2022.

Amare, Brussels Airlines’ aircraft honoring The World’s Best Music Festival “Tomorrowland” will bear its livery until 2023. The fifth Belgian Icon Aerosmurf, dedicated to Belgium’s beloved small, blue characters, the Smurfs, will carry its drawings until 2024. The airline’s youngest special livery, dedicated to one of the most talented artists of the sixteenth century, Flemish Master Pieter Bruegel the Elder, will remain in the fleet until 2024. Any possible changes to or replacements for these last three icons are not known yet, but the airline confirms that it will continue with the Belgian Icon series in the future.