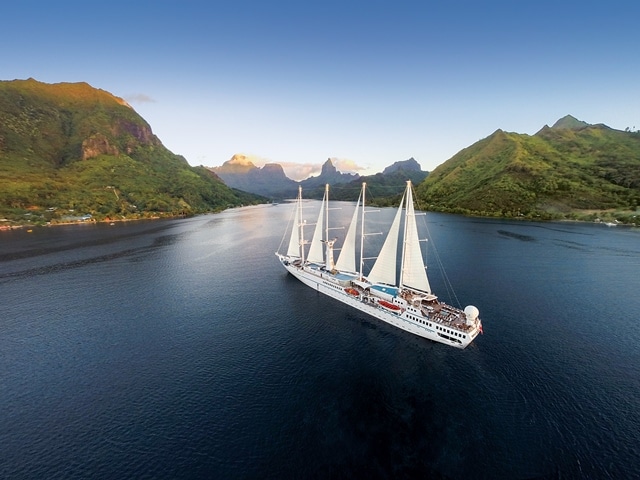 With a brighter travel environment now visible around the corner, Windstar Cruises released its annual wave season offer January 5, 2021 and encourages prospective cruisers to take advantage of the offer now and book early so as not to miss out amid the coming rush of travel planning. The Sail Small, Live Large With Big Perksoffer lets travelers choose from a set of complimentary perks plus a reduced deposit of 5%.

Running from January 5 through February 28, 2021, “Pick Your Perk” savings options include:

Guests may pick one complimentary perk which vary depending on the length of their cruise and room category. Along with this offer, deposits have been reduced from 15% of cruise fare to 5%. Windstar’s updated Travel Assurance Booking Policy allows cancellation up to 48hours prior to departure on 2021 cruises.

“Bookings are picking up for the latter half of2021 and for 2022,” said Windstar Cruises’ President Chris Prelog. “As vaccines start to roll out around the world, we are all seeing the light at the end of the tunnel, and that’s spurring people to plan much farther ahead. Take advantage of these special offers now so you can enjoy the vacation you want in your desired destination and timeframe, otherwise, you may find yourself left out.”

Prelog also reported that Windstar’s vacation planners say new to Windstar guests are booking because they want to sail on smaller ships in a more intimate atmosphere. Windstar Cruises specializes in small ship cruising to waterways and ports where the mega ships can’t sail. Its three small, all-suite yachts and three sailing ships host between 148 to 342 guests, known for visiting small ports, waterways, canals, and rivers that the “cities at sea” just can’t access.

The phones are ringing, and bookings are coming in for 2021 and beyond for one primary reason: small, upscale cruise ships to aspirational, exotic places are very appealing. These yachts that have fewer people on them than a New York City subway car in rush hour, or less passengers than can fit into a lifeboat on a 200,000-ton cruise ship that holds up to 7,000 people. These are yachts where you can dine outside, rarely tie up to a major cruise port with dozens of other ships and tens of thousands of people on the piers, and where you can quite literally swim, kayak or snorkel off the back of the yachts thanks to a Watersports Platform on the stern. While there are no Broadway shows, rock walls or zero-gravity flight simulators, there are nights under the stars with the deck-lights out for stargazing, plenty of quiet space to be at peace with yourself, family or friends and evenings and overnight port calls where it’s likely to be the only ship in port.

“These are cruises to escape the rushing, worried world,” said Prelog. “We are expecting a tidal wave of bookings in the months ahead now that the vaccine is being distributed. The Caribbean is easy to access for many and will be very popular, especially aboard the newly transformed Star Breeze. And our most popular destinations that typically sell out are the Greek Isles, Italy, Iceland and Tahiti.”