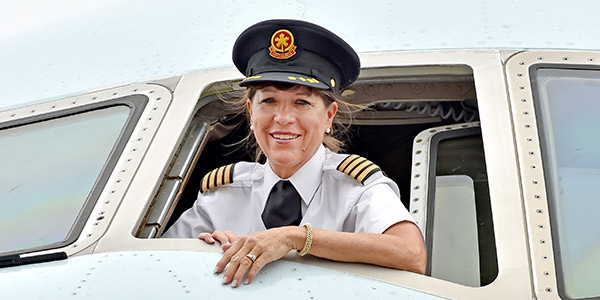 Air Canada is pleased to announce that the application process for the second annual Captain Judy Cameron Scholarship, established in honour of the airline’s first female pilot with the goal of helping the next generation of women follow in her trailblazing footsteps, is now open. The scholarship is awarded in conjunction with the Northern Lights Aero Foundation.

“The aviation industry has undergone drastic changes over the last few months. Encouraging the next generation of girls and young women to pursue their aviation dreams is as important as ever. Air Canada remains committed to championing equal opportunities for all qualified people. Last year, four pilots-in-training benefitted from this scholarship and we look forward to selecting the next honourees. Many capable and qualified women work at Air Canada as pilots flying the most sophisticated aircraft globally, as engineers maintaining technologically advanced airplanes and systems, and in specialized, multidisciplinary airline operations. At Air Canada, there is no glass ceiling. Women hold C-suite, executive and senior management roles across our airline,” said Arielle Meloul-Wechsler, Executive Vice President, Chief Human Resources and Communications Officer at Air Canada.

“The scholarship is probably the biggest honour in my entire life. Air Canada decided that they would do a $20,000 a year scholarship, to be divided amongst selected applicants who are pursuing a career either as pilots or aircraft maintenance engineers. And I think it’s just wonderful that they want to support diversity in this business. It is geared towards women who might not otherwise be able to pursue the career. I think it’s gratifying, it’s heartwarming. It makes me very proud,” Captain Judy Cameron said.

Earlier this year, the first recipients of the Captain Judy Cameron Scholarship were named, four young women who are in the process of completing their flight training to become pilots: Olivia White, Rebecca Beylerian, Urooj Ali and Yasna Taieb.

“This scholarship has provided me with immense financial support. Just recently, I completed my night rating and I’m currently working on finishing my Commercial Pilot’s License. Both of these are being supported by the Captain Judy Cameron Scholarship. This scholarship allows me to put aside my financial worries and instead just focus on flying and my aviation career,” said Urooj Ali, who is in her second year of Geography and Aviation at the University of Waterloo, and currently flies out of Waterloo Wellington Flight Centre.

“The scholarship has helped, not only financially, but just through the support of having organizations and people and pilots that are there to support you as a woman in aviation, working towards their career. I also met some really fantastic pilots, be that captains from Air Canada, as well as other recipients of the award. We’re still in touch. It was an honour to meet them all,” said Olivia White, who is working toward her Commercial Pilot License at the University of Windsor and Journey Air Flight Centre.