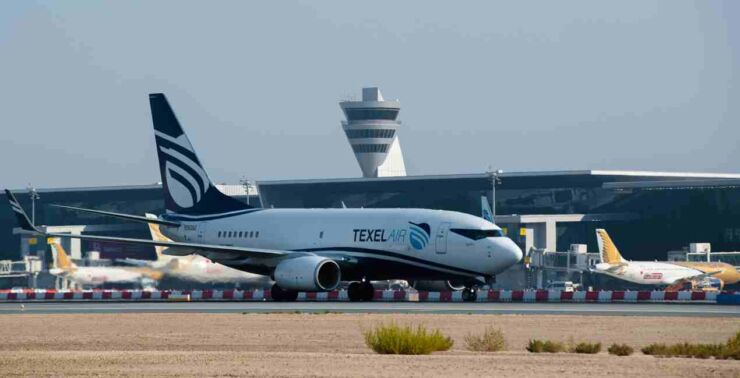 Texel Air, an established private airline and MRO based in the Kingdom of Bahrain, announces the arrival of the latest addition to its fleet, the Boeing 737-700 FlexCombi, a first of a kind aircraft conversion developed to provide the most versatile third party cargo charter solution available in the market today.

The aircraft arrived at the Company’s private hangar at the Bahrain International Airport where it was greeted by H.E Engineer Kamal bin Ahmed Mohamed, Minister of Transportation & Telecommunications alongside other VIPs and the management and Board members of Texel Air.

The aircraft, which will be based in the Kingdom of Bahrain, is unique in its ability to be configured in seven different ways for multiple purposes in a remarkably fast 48-hour time frame. The FlexCombi can switch seamlessly to operate humanitarian, government, express integrator and commercial flights from major airports to smaller remote runways with configuration flexibility achieved without compromise in cargo volumes and customised mission capability. In addition to cargo, the aircraft is able to transport up to 24 people as well as offering the option for medical evacuation flights using two speciality medical beds installed on the aircraft. The aircraft is able to load both civil (PAG) and (463L) pallets and its initial and planned configurations include:

The FlexCombi also has a number of standard and optional features outside of the multiple interior configurations. These operational enhancements were researched and adopted to ensure the aircraft was able to meet both current and evolving requirements of the airline’s diverse customer base.

George Chisholm, Chief Executive Officer for Texel Air ’s parent company Chisholm Enterprises, added, “We are delighted to welcome the arrival of our first-of-a-kind Boeing 737-700 FlexCombi to the Kingdom of Bahrain, where we have proudly grown from an organic start-up airline to a leading innovator in niche cargo operations serving the Middle East, North Africa and global markets. From our strategic position in Bahrain, a growing regional hub for aviation and logistics, we will operate this versatile aircraft, serving an international roster of clients that have long awaited a solution that provides them with unmatched levels of flexibility.”

He continued, “We would also like to thank the Ministry of Transportation & Telecommunications’ Civil Aviation Affairs for the support we have received throughout the development process, which has been excellent. The supportive ecosystem and infrastructure found in Bahrain’s aviation sector has been instrumental in allowing us to achieve the kind of innovations like the FlexCombi. Among the factors setting Bahrain’s aviation sector apart, and fostering our success, are the benefits of its investment strategies including its Free Trade agreements and open approach to start ups from outside, the Kingdom’s strategic geographic location, which makes it very well placed to serve the broader region, the Civil Aviation’s many strong bi-lateral ties and the deep experience and specialist expertise in its aviation services industry that has enabled us to bring in a unique aircraft that is more complicated than a standard passenger or cargo aircraft to be based here.”

The FlexCombi was developed in partnership with PEMCO World Air Services (Tampa USA), who effectively translated the concept into an approved FAA STC. For its work on the FlexCombi, PEMCO, in September 2017 was awarded “Innovator of the Year” at the Chicago Freighters World conference.