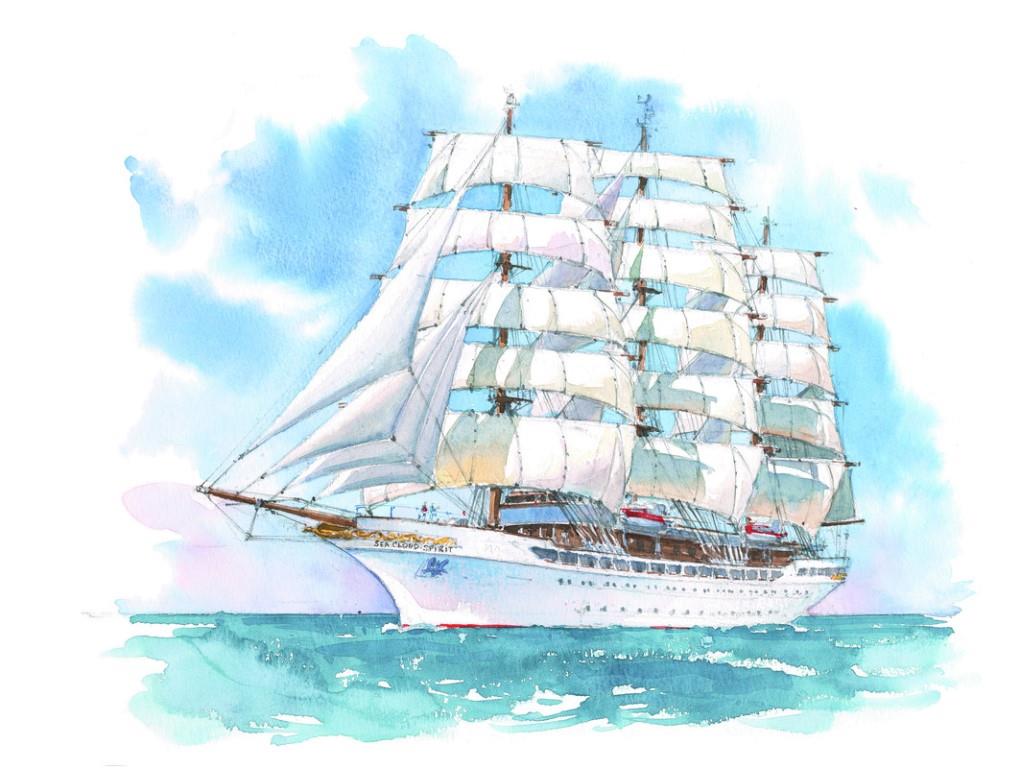 In about a year’s time, SEA CLOUD CRUISES’ third windjammer will be taking to the seas.

“Everything is running on time, so we’ve set the launch date for the new ship’s maiden voyage as 29 August 2020,” Managing Director Daniel Schäfer announced in Hamburg on Tuesday. Just like its sister ships the SEA CLOUD and SEA CLOUD II, the SEA CLOUD SPIRIT combines a genuine passion for sailing with the atmosphere of a private yacht.

The 138 metre-long three-master can accommodate up to 136 passengers and, like its two sister ships, occupies a special niche within the expanding cruise market. “Our new addition to the fleet will also demonstrate that gentle tourism is entirely possible in the growing market for cruise travel,” says Managing Director Daniel Schäfer.

The SEA CLOUD SPIRIT is yet another milestone in the Hamburg-based shipping company’s success story, which began 40 years ago with the legendary SEA CLOUD, joined in 2001 by the SEA CLOUD II . The flagship of SEA CLOUD CRUISES is based on the faithfully restored private yacht that the American multimillionaire Edward F. Hutton had built for his wife Marjorie Merriweather Post in 1931 at the Germania shipyard in Kiel. Following a rich and varied history, the 110 metre-long four-masted barque has been used by SEA CLOUD CRUISES for its luxury cruises since 1979. “Our ships are still sailed traditionally by hand today. This is what makes the atmosphere on board so unique,” explains Schäfer.

The SEA CLOUD SPIRIT is designed as a three-masted fully-rigged ship. With around 4100 square metres, it is able to carry twice the sail area of the sail training ship Gorch Fock, for example. The tallest of the three masts is 57 metres high. The newly built ship is equipped with two diesel-electric drives with a capacity of 1700 kW each. For SEA CLOUD CRUISES , it was a natural choice to operate all ships with low-sulphur marine diesel from the outset. “The use of heavy oil was never an option for us. We offer a sustainable experience that works in harmony with nature and the people whose countries we visit,” Schäfer says, explaining the concept of SEA CLOUD’s sail-powered cruises.

Interior construction has already begun at the Metalships & Docks shipyard in Vigo, Spain, and work on the deck is going to plan. The ship’s interior has been designed by the renowned Hamburg planning office PARTNER SHIP DESIGN. Upon completion, the SEA CLOUD SPIRIT shall present all the majesty of a tall ship, offering guests plenty of outdoor space, an exclusive wellness and spa concept, with an elegant interior design in the style of a classic yacht. Out of the 69 outer cabins, 25 will have their own balconies and for the first time ever on a sailing ship, the SEA CLOUD SPIRIT will also feature a passenger lift connecting the various decks.

In order to enhance the guests’ culinary experience, the SEA CLOUD SPIRIT will also have a bistro on board. “For dinner, in addition to fine dining in the restaurant, we will also be offering our guests the option of choosing from our bistro menu on the lido deck at a time that suits them.” This step represents the shipping company’s efforts to adapt to the changing requirements of the market.

“We want all our guests to feel comfortable on board our ships and to be able to focus on the desired destination and the respective programme when selecting a cruise.” Certain areas of the SEA CLOUD II are therefore also set to be modernised next year, with a bistro concept to be introduced on this ship too.

The maiden voyage next year will mark the end of a more than ten-year planning and construction process. The first incarnation of the current SEA CLOUD SPIRIT was launched in 2008 as the SEA CLOUD HUSSAR. However, shortly before the completion of the hull, the project was interrupted when the previous shipyard went bankrupt. “We had no access to the hull for years, but we did not lose sight of the project,” explains Schäfer. When the project became available again after the end of the bankruptcy proceedings, SEA CLOUD CRUISES immediately seized the opportunity last autumn following intense negotiations.

It was, of course, well worth the wait. “With the new shipyard Metalships and PARTNER SHIP DESIGN, we have two highly professional companies at our side, which means we can now achieve an even better product,” states Schäfer. Furthermore, the shipping company’s extra ten years of market experience directly informed the construction: “We will now come out of this with a ship that not only has a tried-and-tested design, but also one that’s extremely up to date,” says Schäfer.

Since 1979, SEA CLOUD CRUISES has been one of the world’s top names in cruises. The 88-year-old four-masted barque SEA CLOUD and its younger sister SEA CLOUD II regularly appear with five stars each in the Berlitz Cruise Guide’s list of the top five boutique ships. SEA CLOUD CRUISES is a founding member of the hotel association FEINE PRIVATHOTELS.