Virgin Atlantic has allowed its employees to choose uniforms that reflect their gender ideology. Low-cost airline Eurowings has allowed sneakers instead of dress shoes.

Virgin Atlantic announces an update to its gender identity policy and removes the requirement for its people to wear gendered aviation uniform options.

Virgin Atlantic has launched its updated gender identity policy, giving its crew, pilots, and ground team the option to choose which of the iconic uniforms, designed by Vivienne Westwood, best represents them – no matter their gender, gender identity, or gender expression.

Reflecting the diversity of the workforce and in a move that cements its position as the most inclusive airline in the skies, Virgin Atlantic will offer its people a fluid approach to its red and burgundy uniforms, meaning LGBTQ+ colleagues will be able to choose either the red or the burgundy uniform, depending on which best reflects themselves.

The announcement is part of an on-going drive to champion the individuality of its people and customers and is complemented by the roll out of optional pronoun badges for all its people and those travelling with the airline. This move enables everyone to clearly communicate and be addressed by their pronouns. The badges will be available to teams and customers from today and customers simply need to ask for their preferred badge at the check in desk or in the Virgin Atlantic Clubhouse.

Virgin Atlantic has also updated its ticketing systems to allow for those who hold passports with gender neutral gender markers to select ‘U’ or ‘X’ gender codes on their booking as well as the gender-neutral title, ‘Mx’. Currently citizens from a small number of countries including the USA, India and Pakistan, are able to hold these passports and travellers must travel on the codes that match their passport. In lieu of passports with gender neutral gender markers being available for all, Virgin Atlantic is implementing a longer-term plan to amend communication preferences to ensure customers are addressed by their preferred pronouns across all touchpoints.

Mandatory inclusivity training will also be rolled out for its people at all levels across Virgin Atlantic and Virgin Atlantic Holidays as well as a series of inclusivity learning initiatives for tourism partners and hotels within destinations such as the Caribbean to ensure all our customers feel welcome despite barriers to LGBTQ+ equality.

Launched as part of its ‘Be Yourself’ agenda, the airline has already unveiled a series of industry-leading inclusivity initiatives for its people to ensure they can truly be themselves at work and feel comfortable in their roles. This latest addition follows a decision in 2019 to offer cabin crew the choice whether to wear make-up as well as the option to wear trousers and flat shoes. More recently the airline lifted restrictions around allowing visible tattoos for crew members and its front line people.

Jamie Forsstroem, Cabin Crew at Virgin Atlantic commented: “The updated gender identity policy is so important to me. As a non-binary person, it allows me to be myself at work and have the choice in what uniform I wear.”

Michelle Visage, Tanya Compas, Talulah-Eve and Tyreece Nye have teamed up with Virgin Atlantic to showcase the new policy in a stylised fashion shoot that has been released today.

Michelle Visage commented: “As the mother of a non-binary child, and as an ally to the LGBTQ+ community, these efforts by Virgin Atlantic to further inclusivity for its people are extremely important and personal to me. People feel empowered when they are wearing what best represents them, and this gender identity policy allows people to embrace who they are and bring their full selves to work.”

The announcement comes as research finds that enabling employees to express their true selves at work boosts happiness (65%), increases mental wellbeing (49%), creates a more positive workplace culture (36%) and provides a better experience for customers (24%). Employees also reported feeling more accepted and comfortable when able to be their true selves at work (26%) and an increased sense of loyalty to their employer (21%).

Despite these positive benefits, 25% of Brits have felt pressure to hide their true selves at work, with 13% feeling uncomfortable making requests that enable them to express who they really are. Brits have dressed differently (30%) or in clothing they aren’t comfortable in (15%), changed the way they style their hair or makeup (22%) and covered up parts of their personality (38%) all in an attempt to fit in.

The airline’s initiatives also include an update of its existing trans inclusion policies, which already allows time off for medical treatments related to gender transition, personal choice of changing & shower facilities that align with the gender a person identifies as and co-creation of a personalised transitioning plan.

WestJet recently celebrated the launch of its new uniform collection for frontline team members, on a special runway at the YYC Calgary International Airport. The uniforms, conceptualized by international designer, Juli Grbac, are unique to Canada and were created with safety and inclusivity at the forefront.

While developing WestJet’s new uniform, frontline WestJetters across all departments of the airline were consulted throughout the development phases to refine the designs and create a product suited to those who would wear it.

In 2017, WestJet was the first Canadian airline to update their uniform guidelines to be unchained from gender norms. WestJet’s new uniforms, The Lakes and Rocky Mountain collections, further that approach as they are genderless, providing the opportunity for WestJetters to select the uniform that is most authentic and comfortable to them. Redesigned name tags also feature a newly created space for pronouns, to promote greater inclusivity for everyone in WestJet’s world, while an infusion of the airline’s iconic teal colour highlights its 26-year history.

Along with the new uniforms, WestJet recently updated its tattoo policy to ensure frontline staff have the freedom to showcase visible tattoos and celebrate individuality, while wearing their uniform and representing the airline.

Safety in every stitch

Keeping safety above all, every component of WestJet’s new uniforms has been tested for harmful substances or possible skin irritants. WestJet will proudly be the first airline in Canada to carry the Standard 100 OEKO-TEX certification, ensuring all WestJetters will not only look good, but feel good in their uniform.

WestJet’s new uniforms were produced by Unisync, a North American enterprise with exceptional capabilities in garment design. On May 30, 2022, Unisync and WestJet were awarded Best Program in Transportation – Aviation and “Best of the Best” at the North American Association of Uniform Manufacturers and Distributors annual convention. 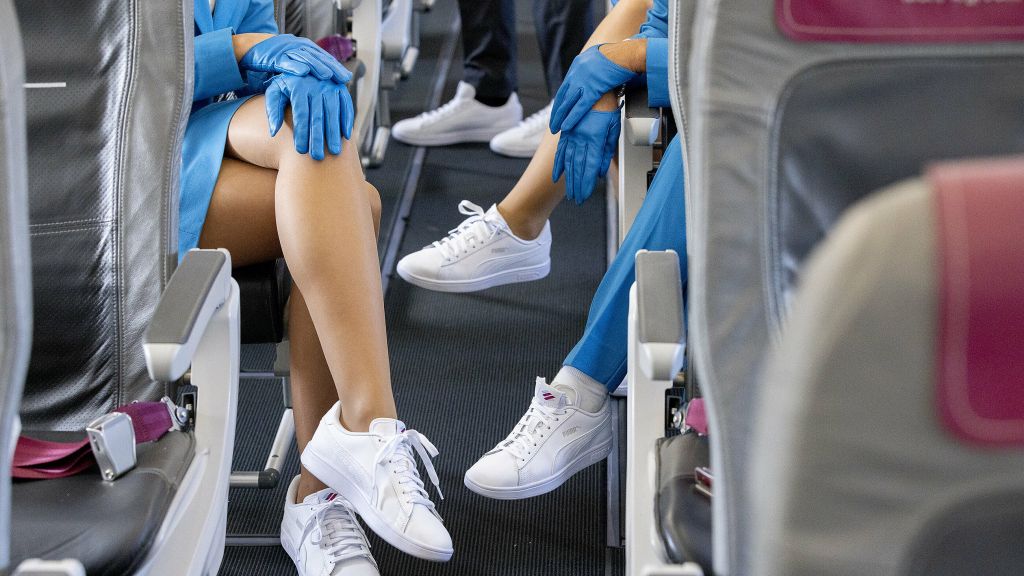 Fashion premiere: crews wear Eurowings sneakers with their uni-forms for the first time

Sneaker alert at Eurowings: crews of the German airline will add white sports shoes with the Eurowings logo to their uniforms for the first time this Friday. The airline, which is part of the Lufthansa Group, doesn’t just want to create a fashionable eye-catcher with this, but is also responding to the desire of its employees for an athletic travel companion. As a token of appreciation for all the extra miles Eurowings employees went during the pandemic, they received free sports shoes from the airline’s cooperation partner Puma at the beginning of September. From now on, employees can wear the all-white sneakers with the Eurowings logo: not only privately and in the office, but also on board Eurowings flights – on selected Fridays, the so-called “Sneaker Flydays”. The next Sneaker Flyday will take place on Friday, 7 October, and on the first Friday of each month after that.

Crews Are Not Allowed Out of Russia Due to Mobilization