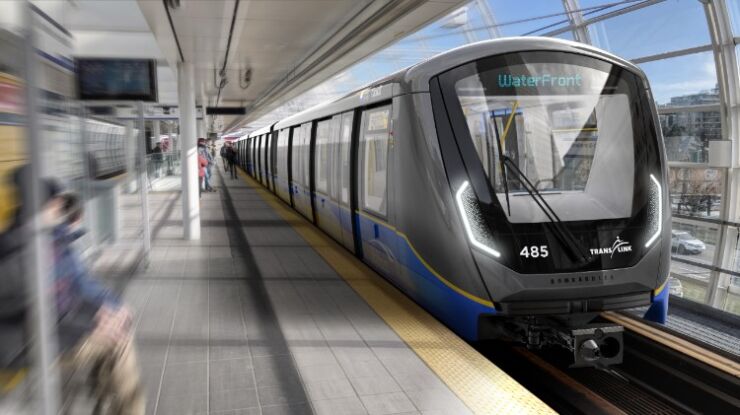 Global mobility technology leader Bombardier Transportation announced today that it has signed a contract with TransLink for 205 new rail cars for the SkyTrain network in Vancouver. The modern 5-car trains will provide additional capacity to meet the region’s current and future transportation needs. The contract is valued at $721 million CAD (565 million US, 461 million euro) and includes options for up to 400 additional rail cars.

“We value our long-term partnership with TransLink and our role in supporting the public transit system that makes Vancouver one of the world’s most livable cities,” said Elliot G. (Lee) Sander, President, Americas Region, Bombardier Transportation. “The new rail cars will be designed, assembled and tested in Canada, which makes us very proud. We look forward to continuing to meet the mobility requirements of the growing Metro Vancouver region and contributing to its sustainable development.”

The new rail cars are being designed by teams at Bombardier Transportation’s North American headquarters in St-Bruno, Quebec and at Bombardier’s facilities in Kingston, Ontario.  The cars will be assembled and tested in Kingston, then further tested and commissioned by Bombardier employees in Metro Vancouver.

Bombardier has been providing transit solutions to Greater Vancouver since 1986, designing and supplying the original SkyTrain system, all of the electrical and mechanical systems for its 2002 extension, and three generations of automated vehicles (Mark I, II and III). Building upon the world-class reliability and operational performance of these rail cars, the new trains will incorporate the latest in technology upgrades and enhancements including a modernized cab, a refreshed interior configuration for seating and flex areas, new bicycle racks and new passenger information screens.

“This will be the largest fleet procurement order we’ve ever undertaken,” says TransLink CEO Kevin Desmond. “These new SkyTrain cars will not only help replace our aging fleet, but also prepare Metro Vancouver’s transit system for the upcoming SkyTrain expansion. Bombardier has been selected following a thorough evaluation process and we look forward to once again working with them to renew and expand our SkyTrain fleet.”