How Many Tourists Did Antalya Lose in 2020?

According to data from the Ministry of Culture and Tourism, Turkey’s most popular tourist destination, Antalya; down 81% and attracted 2.37 million foreign visitors In the 9 months of 2020.

How far were Ukrainian tourists ahead of the Germans?

What was the weight of the Ukrainian tourist in Antalya?

Will the British be Antalya’s main market?

On the other hand, the country with the highest number of tourists in 9 months was England. This market, where 193 thousand tourists came, was again in the 4th place in 2019. However, the British market continuous rising graph, just as tourism in Spain, in next 10 years may be the biggest source of tourists for Turkey and Antalya.

While the rapidly growing Polish market since the 2016 crisis has entered the top 5 in Antalya tourism, around 64 thousand tourists came from the market in 9 months of 2020. The market has reached a number of tourists that quadrupled until 2019, especially after 2016, which was one of the deepest crises in tourism.

How many tourists came to Turkey’s most popular tourist destination in September 2020? 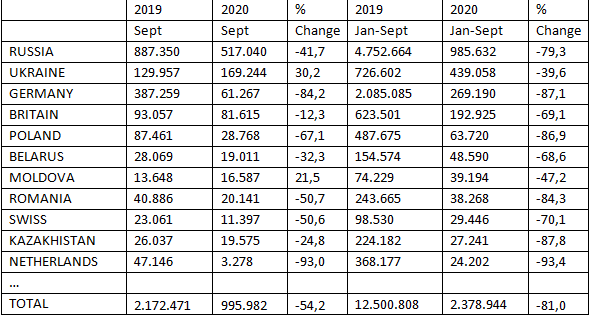