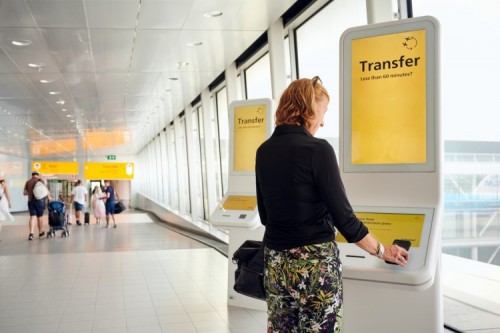 Schiphol is now offering a new service for transfer travellers with a short connection time to get through the queues faster. New self-service units have been installed at two piers where many connecting passengers arrive. Travellers can scan their boarding pass and, provided they have a short transfer time, the unit will print their Short Connection Pass. This pass allows travellers with a short transfer to bypass the security and passport control queues.

Convenient for travellers and staff

This service means that travellers are actively informed of the possibility to use the facilities for short connections. It also allows staff to identify and help travellers with short transfer times more easily. As a result, Schiphol minimises the risk of delays for departing flights with many connecting passengers on board.

“People are gradually willing and able to travel again. Some travellers have a connection time of less than an hour and have to go through the security and passport controls. This new service has been introduced in order to speed up the process of making a short connection, and make it more pleasant. We continue to work on improving our service, even when there are fewer travellers”, said Miriam Hoekstra – van der Deen, Director of Airport Operations at Amsterdam Airport Schiphol.

Travellers can scan their boarding pass at the new units. When they arrive at the security or passport control, they can show their easily-recognisable pass to staff, who will then direct them to a special lane.

If a traveller scans their boarding pass but does not have a short transfer time, they will see a message saying that they have sufficient time to make their connecting flight.

All designated smoking areas at Schiphol after Security Control will be closed.