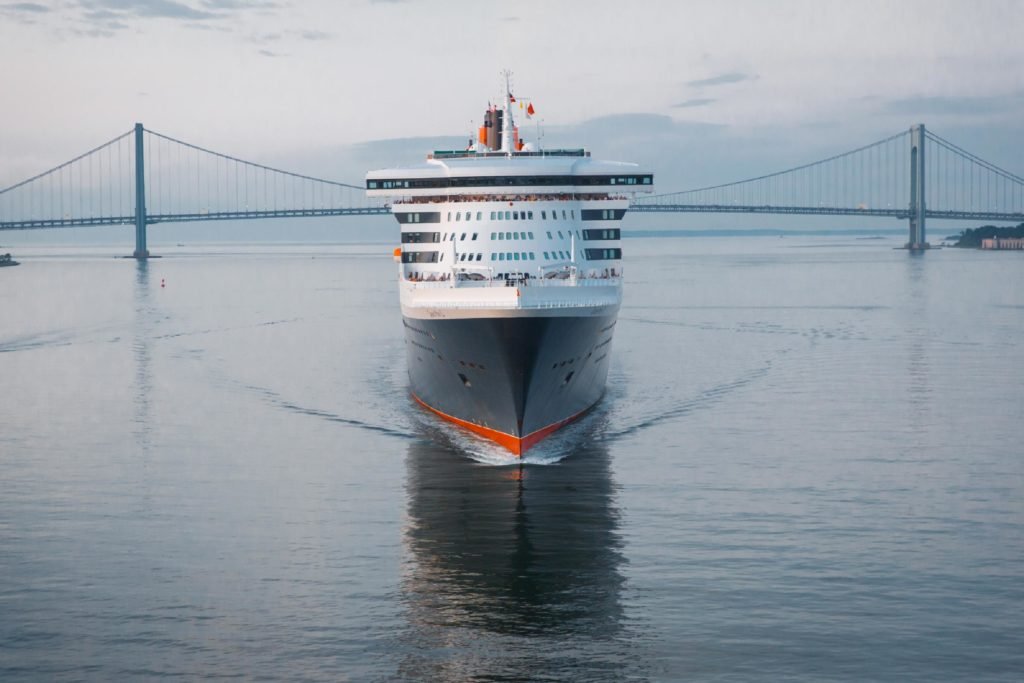 The following Cunard Event Voyages are available on Queen Mary 2 during the 2020 Transatlantic season:

London Theatre at Sea with the Olivier Awards, May 13-20, 2020 (M013): In partnership with the Olivier Awards, the Society of London Theatre’s annual awards recognizing excellence in professional theatre, this seven-night Crossing showcases award-winning talent in conversation about their careers and talks on how productions are put together. Guests will have the chance to be involved in dance classes, choirs and design workshops as well as see “The Oliviers in Concert” in the Royal Court Theatre.

Transatlantic Fashion Week, May 24-31, 2020 (M015): The fifth annual Transatlantic Fashion Week Crossing on Queen Mary 2 features Badgley Mischka who will launch their 2021 resort collection in an exclusive runway show during the voyage. They will also debut their capsule collection designed exclusively for Cunard, which will be sold onboard. Mark Badgley and James Mischka will offer a Q&A with guests during the seven-night voyage along with other industry experts who will share their experience and life in the world of fashion.

Festival of Food & Wine, June 7-14, 2020 (M017): Michelin-starred chef Michel Roux Jr. will headline Cunard’s first ever Festival of Food & Wine. His restaurant, Le Gavroche, which specializes in French cuisine, will be taken to sea as Roux Jr. indulges guests with a series of hosted dinners, cooking demonstrations and a Q&A. The Crossing will bring together additional experts from the culinary industry, including award-winning wine writer Will Lyons, food editor Lisa Markwell and celebrated wine critic Steven Spurrier. For guests particularly interested in the world of wine, there’s a chance to join the Cunard Wine Academy while onboard to gain the Wine & Spirit Education Trust Level 1 Award.

Journey of Genealogy with Ancestry, August 14-21, 2020 (M025): The Journey of Genealogy returns in 2020 to mark the 400th anniversary of the Mayflower voyage. Events onboard will commemorate the significance of this iconic journey and experts from Ancestry, the largest online family history resource in the world, will be joining guests on board. Highlights of the voyage include Ancestry experts hosting talks themed around the historic Mayflower voyage and the stories of passengers onboard; guests can learn to trace their family trees through the centuries to find out how their DNA connects them to the world.

The Greatest Generations Foundation Voyage, August 21-28, 2020 (M026): Cunard will pay tribute to the heroes of World War II during this voyage commemorating the 75th Anniversary of the end of the war. In partnership with The Greatest Generations Foundation, this seven-night voyage will offer guests the opportunity to attend daily programs with several WWII combat veterans, hearing first-hand about their experiences during the war. These distinguished war heroes will be honored onboard while engaging in moderated discussions and meet-and-greets.

Big Band Ball: Inspired by the iconic big bands of the ’30s and ’40s, Cunard’s Big Band Ball combines hugely talented musicians from venues across the ship with special guest musicians from the UK Big Band scene, to create a swinging 17-piece orchestra, accompanied by vocalists performing Big Band classics in the Queens Room for one very special evening.
Note: This event voyage is available on Queen Elizabeth’s seven-night sailing in Asia, March 24-31, 2020 (Q010); and on Queen Victoria’s short break to Amsterdam and Bruges, August 19-23, 2020 (V024).

Anthony Inglis and The National Symphony Orchestra, September 4-11, 2020 (M028): Anthony Inglis will conduct the UK’sNational Symphony Orchestra on this special Crossing as guests are treated to two spectacular performances in the Royal Court Theatre – an evening of American themed numbers, and the Last Night of the Cunard Proms itself. There will be a Q&A with Anthony Inglis, and guests will be able to audition for the choir and practice under the guidance of the NSO, then give a group performance during the evening’s show.

World Space Week, October 2-9, 2020 (M032): This year’s World Space Week Crossing focuses on “Women in Space” and the role they’ve played in space travel. Guests will enjoy hearing from acclaimed speakers from the fields of astronomy, astrophysics, aerospace and astronautics; including Suzie Imber, Associate Professor of Planetary Science at the University of Leicester and Dr Suzanna Randall, Astrophysicist and trainee for the Astronautin initiative, aiming to send the first German women into space in 2020. In addition to space shows in Illuminations, the largest planetarium at sea, Queen Mary 2 is the perfect venue to stargaze, away from city light in mid-Atlantic skies.

Literature Festival at Sea, December 1-8, 2020 (M039): The Literature Festival at Sea in partnership with the Cheltenham Literature Festival, the Times and the Sunday Times, returns in 2020. The program features readings, talks and workshops with some of the world’s most renowned names in literature. Award-winning authors Ian Rankin, Kate Mosse, Alexander McCall Smith, Prue Leith and more will join guests as they discuss their life and work and hold intimate author signings. Times columnists onboard will review the biggest news stories of the year while literary editors and critics will pick their favorite books.

Cunard ‘s Upgrades on Us promotion, offered on bookings made now until February 27, 2020, is available on a variety of the Cunard ‘s Event Voyages, signature Transatlantic Crossings and the popular New England & Canada voyages. The offer is also available on Cunard Alaska, Europe, South America, Australia and Asia voyages on all ships, sailing between June 2020 and January 2022. For those interested in booking 2020 Alaska, Caribbean and New England & Canada voyages, guests can enjoy up to $1,000 of Onboard Credit per stateroom.

Cunard and Fincantieri celebrated the start of construction on the 249th ship of the luxury cruise line, marking an exciting moment in the company’s 179-year history.