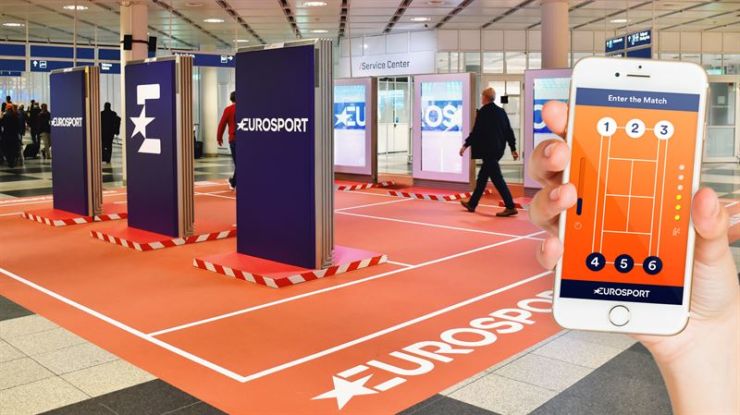 Munich Airport Teams Up with Eurosport

Munich Airport has a well-earned reputation as a venue for exciting sports events. Now, the airport is teaming up with the media agency Mediaplus and the Eurosport television network to stage “Enter the Match,” an event that will bring the exciting action of this year’s Roland Garros French Open tournament to tennis fans at Europe’s first and only five-star airport. And from May 22nd to 29th, airport visitors will be able to walk right into an interactive tennis match played on a 100 square meter playing surface. With a mobile game, they can also get involved and compete to win exclusive access to the Eurosport Player.

On Wednesday, May 22nd, before the official start of the tournament, airport guests in the central area of Munich Airport’s Terminal 1 will find themselves in the middle of a tennis court: On either side of the 100 square meter surface, three 2-meter tall digital pillars will realistically generate the sights and sounds of a match between two players. The players will move between the first and third pillars on their side of the court and play points. That will put passers-by right at the heart of the action for an up-close experience of every shot, true to the motto: “Enter the Match”. After using a QR code to download a mobile game from www.enterthematch.de, visitors can get into the action, too. Those quick enough to follow the sequence of shots between the players and tap in the corresponding pillar numbers will win a free pass to the Eurosport Player – Eurosport’s live and on-demand media player.

Cornelia Rossmann, the director of Advertising and Media in Munich Airport’s Commercial Activities division says: “Munich Airport offers brands attention-grabbing and interactive placement opportunities in a high-traffic environment. This potential is impressively demonstrated by the Eurosport campaign, which shows that airport advertising is seen as an important component of the media mix.”