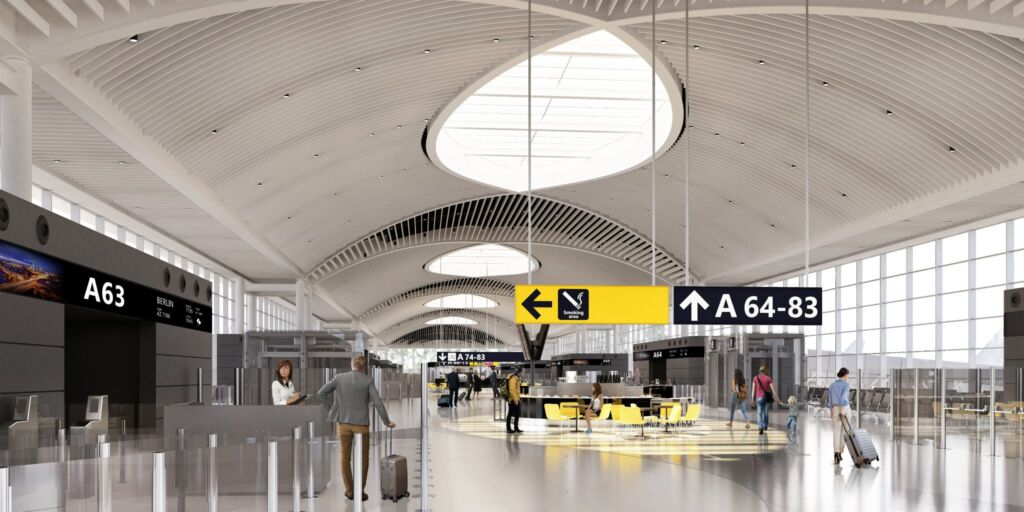 The new boarding area A for Schengen and domestic flights was inaugurated today at Leonardo da Vinci Airport. The event, attended by the President of the Republic, Sergio Mattarella, was also attended by the President of ENAC, Pierluigi Di Palma, the Mayor of Fiumicino, Esterino Montino, the Mayor of the Metropolitan City of Rome, Roberto Gualtieri, the President of the Lazio Region, Nicola Zingaretti, and the Minister of Infrastructure and Sustainable Mobility, Enrico Giovannini. Also present were Atlantia Chairman Giampiero Massolo together with Atlantia CEO Carlo Bertazzo as well as ADR Chairman Claudio De Vincenti and CEO Marco Troncone.

The new 37,000 m2 Boarding Area A, a testimonial to Italian excellence from an engineering and architectural point of view, was completed using the airport site as efficiently as possible (without consuming additional land) and built using the country’s best expertise. It is a state-of-the-art infrastructure for innovative and environmentally friendly solutions that will accommodate an additional 6 million departing passengers yearly at Fiumicino airport, thanks to 23 new gates, 13 of which are equipped with boarding bridges. The infrastructure, an important step in the project to upgrade the eastern area of the airport with a total investment of EUR 400 million, was completed despite the difficult years of the pandemic, which hit the air transport sector particularly hard. It is, therefore, part of Aeroporti di Roma’s airport development project and of the Atlantia Group’s sustainability and innovation-oriented path, whose focus is to make investments that enable the energy transition of its assets while at the same time activating its strong technological upgrade.

The work consists of two large structures connected by a linking body along which 7 masterpieces from the Ostia antica Archaeological Park are exhibited to promote Roman classicism and the historical and artistic value of the area where Fiumicino airport operates an innovative pier dedicated to flights to Schengen and domestic destinations, which allows the docking of the most modern aircraft available and an exclusive shopping gallery with over 6,000 square metres of space dedicated to retail and excellent food & beverage. Outstanding services, in line with the record achieved by ADR in passenger appreciation, certified by Airport Council International and obtained by the Roman airport for five years in a row.

“The infrastructure we are inaugurating today is a symbol: a testimony to the value of Italy, which does not stop despite the difficulties and starts again with courage and vision,” said Aeroporti di Roma CEO Marco Troncone. “With the opening of boarding area A, we ensure our concrete contribution to the country’s restart, preparing ourselves to face the next opportunities for revival, such as the Jubilee 2025 and Rome’s candidature for Expo 2030, which offer Italy and its Capital the chance to reaffirm its central role on the international scene. In this context, we want Fiumicino to continue to be an excellent visiting card: Italy’s future-proof gateway.

Operations at the pier will start tomorrow: the first Ita Airways flight will leave at 07.00, bound for Milan Linate.