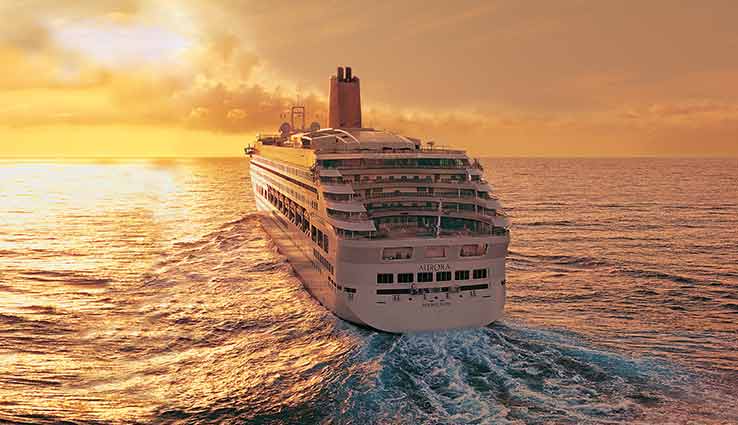 A key stage in the construction of Britain’s newest and most innovative cruise ship has been marked at the Meyer Werft shipyard in Papenburg.

The team building P&O Cruises 184,000 tonnes ship Arvia, which, like its sister ship Iona, will be powered by liquefied natural gas, making them both among the world’s greenest ships, celebrated the milestone with the traditional coin-laying ceremony. This event is a long-held ship-building tradition which is to bring good luck to the ship and its crew through construction to the future at sea.

Specially selected Barbados coins were placed under the block before the block was then lowered onto the coins.

“This is yet another landmark in P&O Cruises new build history. Arvia will be our second ship to be powered by liquefied natural gas as part of P&O Cruises ongoing commitment to sustainable travel. Other world-class environmentally-friendly innovations include shore power connectivity and the latest technology for its four main engines.

“Our guests will enjoy holidays on Arvia, as they have done and continue to do on Iona and on the other ships in the P&O Cruises fleet.

“They will holiday in the Mediterranean in the summer and in the warmth of the Caribbean throughout the winter as Arvia will be our “sunshine” ship.

“The coins that are laid under Arvia’s keel today will be the embodiment of that warmth and sun as they are currency from our winter homeport of Barbados, an island which has had a special place in our heart for over 20 years.

“These coins, with the workmanship and skill of everyone gathered today – and so many more – will keep and protect all on board this spectacular ship.”

This keel laying block weighs 570 tons, is 11.3 metres long, 42.10 metres wide and 11.81 metres high and had to be lifted by a 800 ton crane. The next steps are the completion of the block assembly of the aft part of the ship in the dock as well as the further outfitting of the ship.

Arvia will be delivered in December 2022 and will sail her maiden voyage to the Canary Islands followed by a winter season in the Caribbean. Arvia has 16 decks and will feature Altitude Skywalk a unique high ropes experience, a swim-up bar and stunning infinity pool, new and exclusive Mission Control a multi-sensory escape room, a new restaurant Green & Co featuring Mizuhana serving a plant and fish-led menu, Ocean Studios cinema, 1,300sqm of shopping and the Oasis Spa and Health Club.

Neste and ITOCHU to Grow the Availability of SAF in Japan