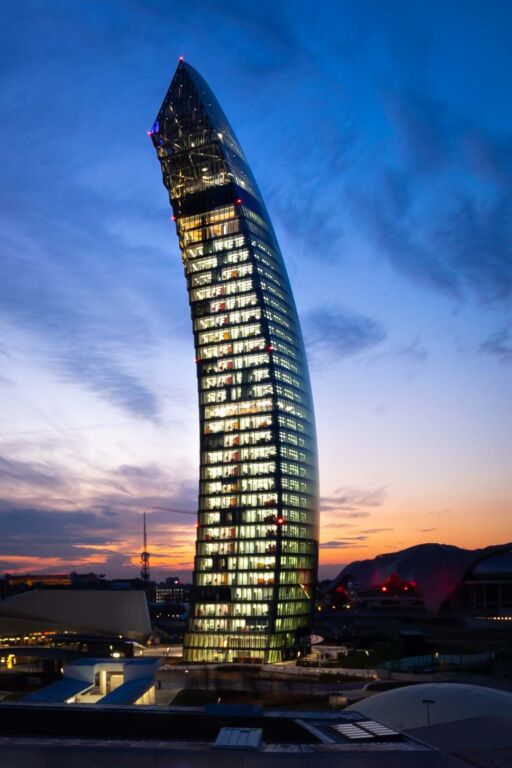 This year the world’s most renowned architecture award for skyscrapers, the Emporis Skyscraper Award, goes to One Barangaroo in Sydney. For the first time in the more than 20 year-long history of the awards, the prestigious trophy goes to Australia. One Barangaroois a 271-meter-tall skyscraper, designed by British architect WilkinsonEyre and is the tallest building in Sydney, offering spectacular views of Sydney Harbor and the city’s iconic Opera House.

Like every year, the winner of the Emporis Skyscraper Award was selected by an international jury of architectural experts from over 300 skyscrapers that were completed in 2020 with a minimum height of 100 meters. For more than 20 years, the renowned award has been awarded by Emporis, the international provider of building data, and is an indispensable part of the international architecture scene.

According to the jury, the extravagant design of One Barangaroo’s exterior façade was the deciding factor for the building coming in at first place. It is inspired by natural shapes and resembles three petals rising slightly twisted into the sky. The magnificent tower stands on a four-story high podium, the outer walls of which are decorated with a mantle of marble. In addition to a casino, apartments and restaurants, the building also houses a luxury six-star hotel owned by the Crown Resort Group, Australia’s largest entertainment conglomerate and developer of One Barangaroo.

Second place was awarded to TELUS Sky in Calgary which has become the city’s third tallest building. The tower is named after its tenant “Telus Communications” a Canadian telecommunications company. TELUS Skystands out because of its extraordinary structure and façade: it has a rectangular base and with rising height the floor plates gradually reduce in size, creating small terraces and balconies. The façade is illuminated at night by a public art LED lighting installation which has been designed by Canadian artist Douglas Coupland. The installation is also accompanied by a smartphone app with live information about the ongoing light performance.

In third place is One Vanderbilt in New York City. The skyscraper, designed by Kohn Pedersen and Fox, is located near Grand Central Terminal in Manhattan and combines state-of-the-art office space with direct connections to one of the city’s largest transport hubs. The striking features of the tower are the four visually clearly separated modules which combined give the building an asymmetrical, distinctive shape, making it one of New York’s latest eye-catchers in the Manhattan skyline.

Due to the Coronavirus pandemic, 2020 was a turbulent and challenging year that also had a strong impact on the construction industry; the total number of skyscrapers completed in 2020 fell by 20% in comparison to the previous year. Nevertheless, the top 10 buildings selected for the Emporis Skyscraper Awards clearly show that many impressive skyscrapers were completed despite the difficult conditions faced by owners, developers, construction companies and architects. In the coming year strong growth is expected to return which underlines the resilience of the construction industry and makes the jury very optimistic for the candidates of next year’s award.