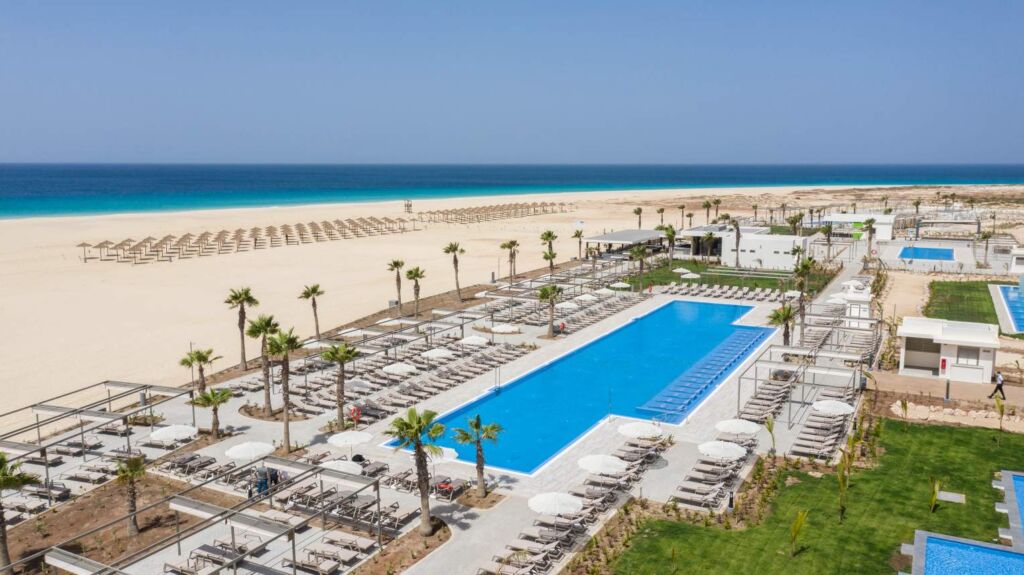 RIU is reopening in Cape Verde, on Sal Island to be precise, following several months of closure, by launching its new hotel, Riu Palace Santa Maria. This five-star hotel, which is the chain’s major project to kick off 2021, is opening in the destination, where it joins Riu Cabo Verde and Riu Funana to form a large hotel complex with no shortage of details. The three interconnected hotels have direct access to the beach.

The hotel Riu Palace Santa Maria, situated at the edge of the beach, brings a significant change: it has a Splash Water World. This facility will be located inside the hotel, together with a water play area and the RiuLand club for small children, as well as a bar that all guests in the complex can stop at to recharge.

The hotel Riu Palace Santa Maria has a total of 1,001 rooms divided into six blocks. The rooms offer a warm, welcoming and modern atmosphere, thanks to the harmonious colour scheme and selection of materials. The key feature in the design is nature, as well as decorative elements inspired by ethnic style. The furniture is dark wood which, together with the earth tones of the flooring, provides warmth in the décor.

Following the ethnic style that pays tribute to the destination, and as a key feature that demonstrates what makes this hotel so special, each block of rooms has an entrance portico, presided over by a 12-metre high mask, and each one is different, making it easy for guests to easily identify their building. All these entrance towers can be seen from the central corridor that crosses the hotel from the reception area.

At the hotel entrance, guests will find a large, light-filled lobby characterised by clean, straight lines which create an understated, elegant and timeless space. In addition, it has several skylights which, together with the large windows, allow an abundance of light to enter. Another feature is that the skylight at the centre of the lobby, which forms a centrepiece thanks to its huge size and central location, acts as the link between all the different spaces in the lobby and forms a striking reference point for our guests.

Between the main building and the Splash zone, the hotel has a total of five restaurants and seven bars. Guests can enjoy all these dining options to the maximum thanks to the exclusive 24-hour all inclusive service by RIU.

The outdoor area includes a total of eight pools, six of which are located facing the beach, linked by a wide sun deck with many spots to relax and areas for sports. The other two are in the three hotels’ shared area. One of them belongs to Splash Water World and the other to the new RiuLand, with water jets and games for the youngest ones. In addition, the hotel offers a wide range of sports and day and night entertainment options.

The Riu Palace Santa Maria is opening with a view to reactivating this destination that has been on hold for months as a result of the crisis caused by COVID-19. This reopening is possible thanks to TUI Poland’s scheduling, as it is operating two weekly flights from 14 March. With this new hotel, RIU now has six hotels in its portfolio in Cape Verde, with three on Sal Island and another three on Boa Vista.