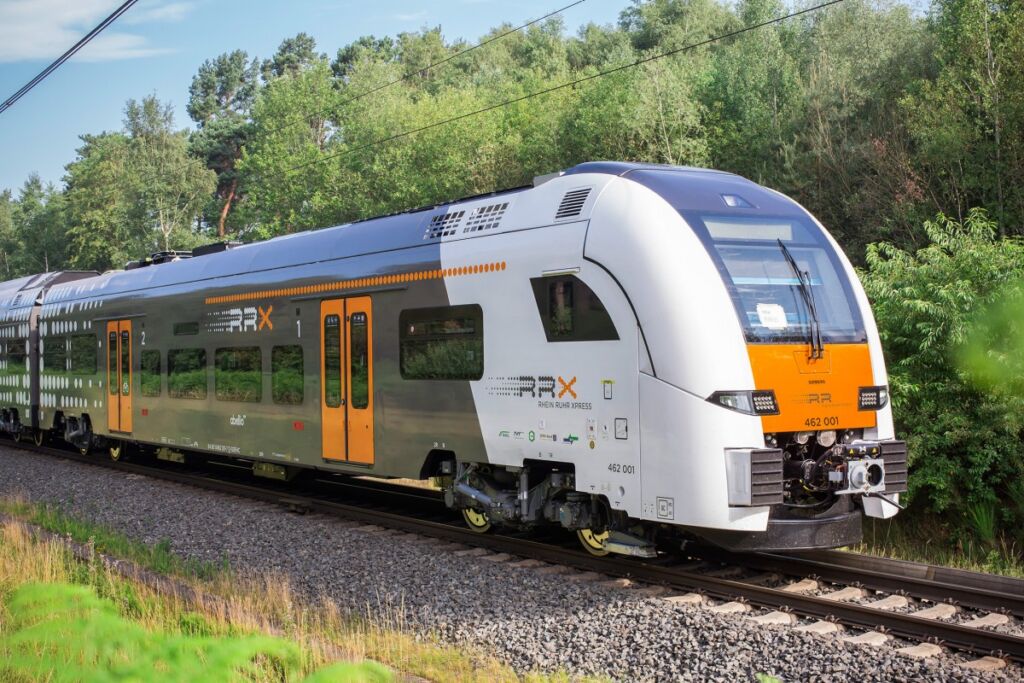 The 84th train for the Rhine-Ruhr Express (RRX) infrastructure and mobility project was handed over right on schedule. The trains were originally ordered from Siemens Mobility in 2015. The RRX order, consisting of trains and a service contract, has a total volume of €1.7 billion and marks the largest order received by Siemens Mobility to date in the sector of regional rail passenger transport in Germany.
The state-of-the-art double-decker trains, which won the German Mobility Award this year, are serviced in the Siemens Mobility Digital Service Center in Dortmund in order to ensure nearly 100-percent availability. Once the infrastructure project’s extensive construction work has been completed, the trains will operate at 15-minute intervals between Dortmund and Cologne.

Everything related to the RRX trains is digitally networked: trains, service center, logistics center and employees. The trains were built in Krefeld, tested in Wegberg-Wildenrath, and are maintained and serviced at the RRX depot in Dortmund.

North-Rhine Westphalia’s Ministry of Transport initiated the project and is working closely with the Federal Ministry of Transport and Digital Infrastructure. Five authorities are partners in implementing the RRX project: the Verkehrsverbund Rhein-Ruhr (VRR), the Nahverkehr Rheinland (NVR) and the Zweckverband Nahverkehr Westfalen-Lippe (NWL) for the state of North-Rhine Westphalia (NRW); and the Zweckverband Schienenpersonennahverkehr Rheinland-Pfalz Nord (SPNV-Nord) and the Nordhessische VerkehrsVerbund (NVV). Working with the support of the state of North-Rhine Westphalia, these authorities were responsible for the Europe-wide tenders for procuring and servicing the RRX trains and for the operation of the future RRX lines. They also share a central role in the project’s operational implementation.

The RRX is operated by Na­tio­nal Ex­press Rail GmbH and Abel­lio Rail NRW GmbH. DB Netz AG and DB Station&Service AG are jointly responsible for the extensive expansion and upgrading of the RXX infrastructure.

Once the project’s related infrastructure expansion has been completed, the RRX network will consist of seven lines, allowing 15-minute headways in the core stretch between Dortmund and Cologne. The Rhine-Ruhr Express will significantly improve the mobility of travelers and commuters in the state of North-Rhine Westphalia and also offer cross-border connections to North Hesse, Rhineland-Palatinate and Lower Saxony. The new RRX trains are already being used on several regional lines in the network.

Eight million people living in cities and communities with RRX stations benefit from the RRX – representing roughly 45 percent of the NRW population. Extensions of the lines, which cover a large part of the NRW route network, ensure that people here will reach their destinations even faster and more punctually than in the past. In addition, the modernization of numerous train stations in NRW is enhancing the comfort and convenience for travelers. Travelers in the states of Rhineland-Palatinate, Hesse and Lower Saxony can also look forward to the RRX trains, since individual lines in the system extend to the cities of Coblenz, Kassel and Osnabrück.