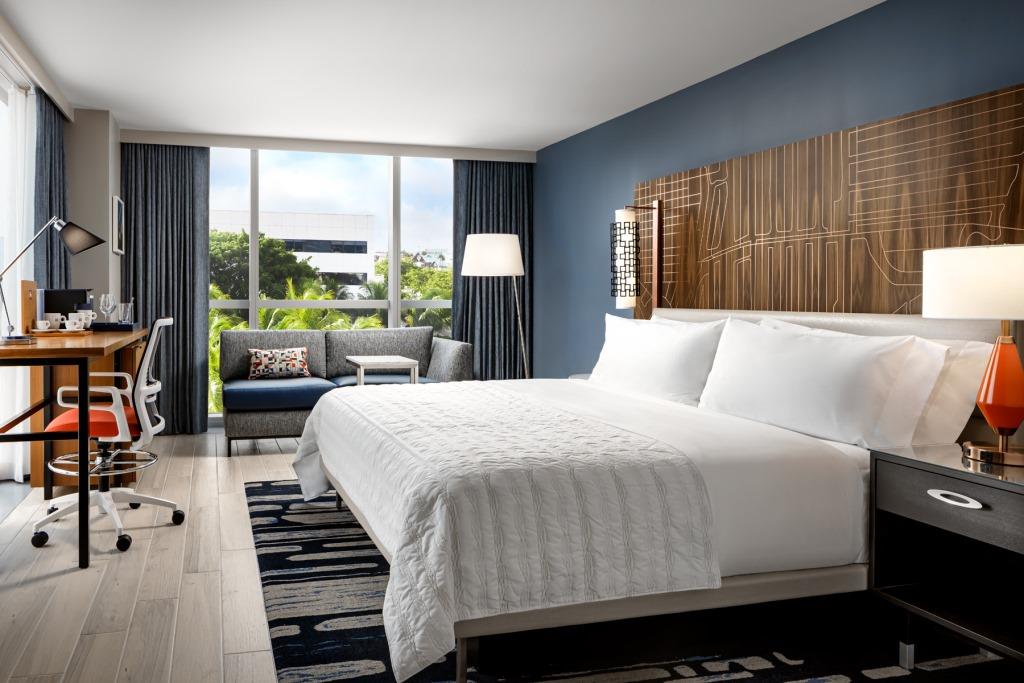 “With a nostalgic nod to the glamour of the French Riviera in the 1960s, Le Méridien inspires travellers to explore the world in style, savour the good life and enjoy experiences that offer something more than meets the eye,” said George Fleck, Vice President of Global Brand Marketing & Management. “The debut of this hotel is part of the brand’s significant growth strategy and further reinforces our brand’s commitment to ensuring that guests experience destinations around the globe through the lens of its European spirit”

Located just steps from the city’s famed The Design Center of the Americas, the 12-story hotel, designed by David Ashen of dash design, features 245 thoughtfully designed guest rooms and suites. Throughout the exterior and interior of the hotel guests will find references to the sky and sea with design details such as a grand oculus in the lobby that frames the sky to pay homage the glamorous era of air travel, allowing guests to stargaze and view planes passing over. The guestrooms are minimal and modern in design with touches of blue and grey to reflect the destination, features custom-made headboards with mappings of the city inlaid into the wood veneer, and local photography captured by Elizabeth Gill Lui that celebrates the diverse architecture and environment of Fort Lauderdale.

Guests will have the opportunity to indulge in five culinary outlets throughout the hotel including the brands signature Latitude/Longitude Bar serving light fare at Le Méridien Hub and Cabana, as well as Toro Latin Kitchen, serving up a South American menu, La Bibloteca de Tequila which is an exclusive tequila bar and lounge, Constellation Café serving daily French fare, and the hotel’s outdoor bar offering Caribbean-style fare poolside.

Le Méridien Dania Beach at Fort Lauderdale Airport will also offer guests a sensorial environment through the brand’s signature scent, which was developed with MALIN+GOETZ. Aptly named LM002 for airplane tail numbers, the alluring scent will be featured in the public spaces, as it is at all of Le Méridien’s properties globally. Paying homage to its French roots, the brand also has a signature soundtrack that will fill the Hub and public spaces, curated by French Bossa Nova band Nouvelle Vague.

In addition, Le Méridien Dania Beach at Fort Lauderdale Airport will offer guests a variety of amenities including a signature Club Lounge with views of Fort Lauderdale-Hollywood International Airport, a fully equipped state-of-the-art 1,200-square-foot Fitness Center and Yoga Room, an 82-foot zero-entry pool and an outdoor terrace called the “Water Club.” The Hub will serve custom-brewed, barista-crafted coffee beverages as part of the brand’s collaboration with illly coffee for guests to sip and savour.