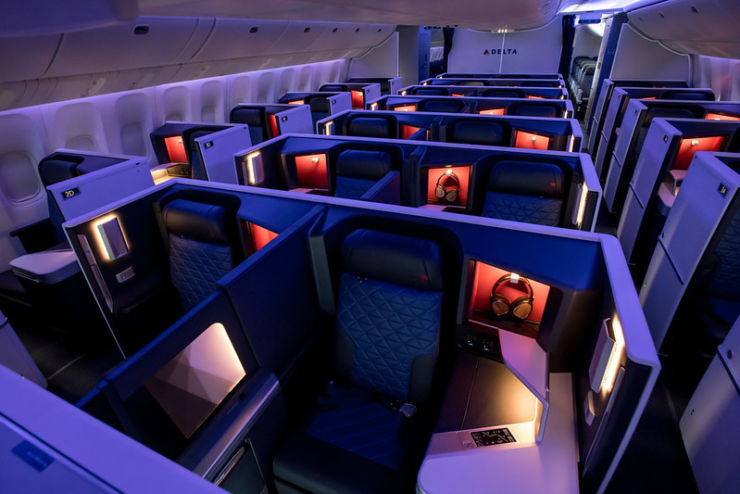 Delta is enhancing the onboard customer experience for some of its most popular routes this fall, thanks to ongoing investments in its fleet. After undergoing modifications to refresh their interiors, Delta’s Boeing 777 and Boeing 767-400 fleets are being added to more international routes from Los Angeles and New York, while all flights on the transcontinental route between the two hub markets will now be flown with Boeing 767-300 aircraft. Along with the introduction of the A220 and A330-900neo aircraft earlier this year, Delta’s premium fleet investments will deliver comfort and consistency to more customers flying across the Atlantic, across the Pacific, and across the country.

Last month, Delta began operating its flights between LAX-Shanghai and LAX-Tokyo Haneda using a Boeing 777 aircraft. Flights from LAX to Paris and Sydney began operating with Delta upgraded 777 fleet earlier this year, meaning that all four of Delta’s long-haul international routes from LAX are now operated using the same aircraft type and offer a consistent experience for customers who frequently travel internationally from LAX.

The fleet alignment also represents the first time that four of Delta’s branded seat products are offered on the LAX-Shanghai and LAX-Tokyo Haneda routes.

Trans-Atlantic network of Delta gets a boost beginning this month with the newly refurbished 767-400 fleet. Flights departing New York-JFK and Boston for London-Heathrow, followed by service between JFK and Brussels, Nice, and Zurich, will be among the first to operate using the updated aircraft, which also feature a modern interior and four branded seat products – including a more private Delta One experience and the Delta Premium Select cabin. Delta’s refreshed 767-400 aircraft will also feature the new wireless IFE system developed by Delta Flight Products with seat-back entertainment screens in every cabin and thoughtful touches like full-spectrum LED ambient lighting and memory foam cushions throughout the aircraft for added comfort. And the 2-3-2 seating arrangement in Delta Comfort+ and Main Cabin means fewer travelers will have a middle seat.

Delta’s New York-JFK to Sao Paulo flight will also operate with the 767-400 beginning in spring 2020, while the New York-JFK to Frankfurt route will have an improved product when it begins flying on the Airbus A330 on January 29.

Earlier this month, Delta began operating flights between JFK and LAX with Boeing 767-300 aircraft – rather than a mix of different aircraft types – making Delta the only airline to offer a consistent, all-widebody cabin experience on the competitive route. The change means that all customers seated in the Delta One cabin will have direct aisle access. Like the 767-400, Delta Comfort+ and Main Cabin feature a 2-3-2 seat configuration, meaning fewer middle seats and more space.

Delta has made significant investments on the JFK-LAX route over the years, most recently by offering complimentary meals in Main Cabin on all flights, as well as adding meals created by LA chefs Jon Shook and Vinny Dotolo in Delta One on flights departing LAX. Customers on Delta’s transcon flights also can choose from up to 10 daily flights each way between JFK and LAX and up to three daily flights each way between BOS and LAX and can stay connected with Wi-Fi for purchase, free messaging, and free in-flight entertainment on all flights.