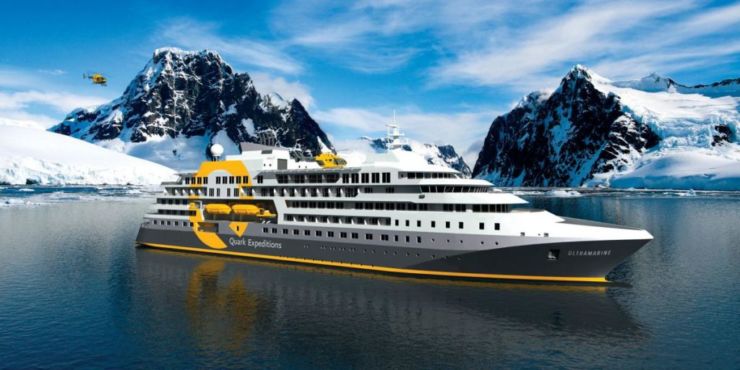 Quark Expeditions, the leader in polar adventures, held the keel-laying ceremony for its pioneering new ship Ultramarine on August 2, officially kicking off the next stage in the ship’s construction: the build of its hull and superstructure.

Held at Brodosplit, the largest shipyard in Croatia, the event was attended by a mix of senior staff from Brodosplit, it’s parent company DIV Group, Quark Expeditions, it’s parent company Travelopia and private equity investors KKR. Speeches were given by Joerg Metzner, Director at KKR, Andy Duncan, CEO at Travelopia, Malcolm Ellis, Senior VP Operations at Quark Expeditions and as well as representatives from both DIV Group and Brodosplit.

“We thank the team at Brodosplit for hosting this ceremony,” says Malcolm Ellis, Senior VP Operations at Quark Expeditions. “A lot of hard work from a lot of talented people has been required to get us to this point. It’s exciting to see our collective vision for this ship come to life, and to have the opportunity to thank everyone involved for their tremendous dedication and effort.”

The keel-laying event, which also marks formal recognition of the 128m, 199-passenger vessel, included a Croatian folk music performance, as well as the centuries-old coin ceremony, in which a specially chosen coin is welded into the ship’s hull to ensure good fortune during the build and subsequent voyages.

“The coin we chose is a beautiful silver coin featuring two Emperor penguins,” says Ellis. “We chose this coin because it perfectly embodies Quark’s mission: to push the boundaries of polar exploration. In our three decades of operation, Quark Expeditions has accomplished a long list of polar firsts, including being the first to take guests to Snow Hill Island to engage with Emperor penguins in their natural habitat. Ultramarine’s mix of design ingenuity and technological innovation will allow us to continue adding to that list of firsts by taking guests further into the polar regions than ever before.”

Ultramarine will join Quark Expeditions’ fleet in late 2020 for the Antarctic 2020.21 season.

“Ultramarine is purpose-built for the polar regions,” adds Ellis. “With this ship, in the hands of the industry’s most knowledgeable, experienced and dedicated team, we will continue to define what is possible in polar exploration while delivering transformational experiences to our guests.”