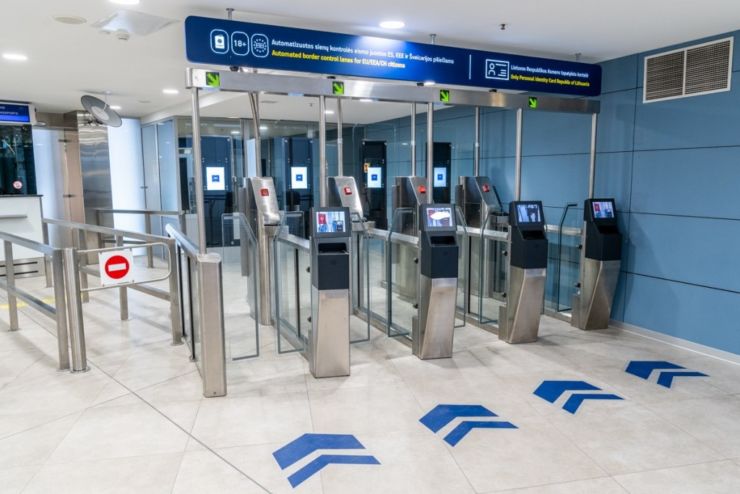 Since today Vilnius Airport passengers may already use an automated border control system. In total, 10 smart self-service gates have been installed in the capital’s air gates that will allow organising the traffic or arriving and departing passengers more smoothly. Such a border control system is currently not available at any airport in the Baltic States and Poland.

The control system which has become operational is a part of reconstruction of the capital’s air gates which implementation will make the verification of passengers’ personal documents and biometric data more effectively and quickly. The Head of the Vilnius Airport Dainius Čiuplys does not have doubts that this decision will have a positive effect on the passengers’ experience.

“Apart from the existing posts of the State Border Guard Service (SBGS), we now offer to passengers a possibility to have an independent border check. We have installed 6 smart gates in the arrival lounge, and 4 – in the departure lounge. The automated border control system will allow travellers to save some time, thus we have no doubt that therefore travel will also proceed more smoothly”, Mr. Čiuplys is convinced.

The Head of the capital’s air gates notes that so far the gates have been launched in the pilot mode. This means that pilot operation will be carried out for some time since the launching of the system. During that time, SBGS officers may perform additional screening of passengers.

“Currently, trained consultants are working at the automated border control gates who will assist travellers in performing correctly all the control steps mentioned above and answer arising questions,“ stated Mr. Čiuplys.

The new automated border control gates at the Vilnius Airport may be used by citizens of the European Union (EU), European Economic Area (EEA) and Swiss Confederation who have identity documents with a digital chip. The check of non-EU citizens will be carried out in particular SBGS posts. Those willing to use the independent control system, will have to possess identity documents with recorded personal biometric data. In Lithuania, such documents have been issued since 29 June 2009.