The most punctual airlines in the world

OAG, British Airways and easyJet rank in the top 20 for annual on-time performance (OTP) of the world’s largest airlines, according to the results of the OAG Punctuality League 2018 – the industry’s most comprehensive annual ranking of OTP for the world’s airlines and airports. 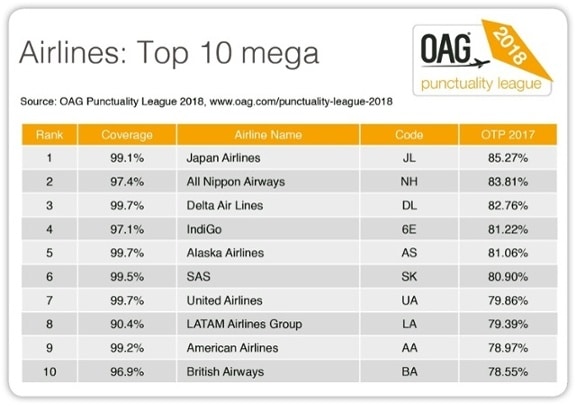 The report from OAG, the global leader in flight information, ranks the two UK-based airlines at 10th and 15th respectively amongst the world’s largest carriers: BA with 79 per cent and easyJet with 75 percent of flights both departing and arriving on time. The 2018 report also places easyJet in the top 20 low-cost carriers (LCCs) for punctuality, while Europe-based airBaltic took the top spot as the most punctual airline in the world, with over 90 per cent OTP.

John Grant, Senior Analyst at OAG, said: “BA and easyJet are certainly holding their own amongst their global counterparts. In a highly competitive environment, it’s great to see the UK-based airlines reporting an impressive OTP.”

The most punctual UK airports