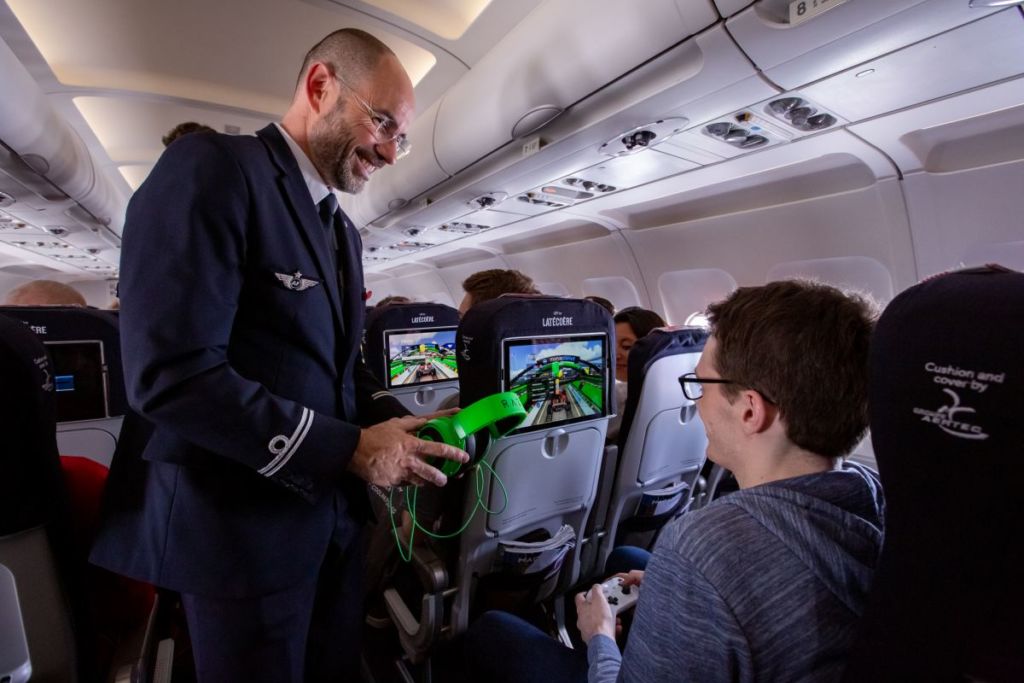 On Wednesday, October 30th, 2019, Air France tested the very first flight equipped with Li-Fi (Light Fidelity) technology, developed by Latécoère on board the commercial flight AF6114 operated by Airbus A321 from Paris-Orly to Toulouse. As part of its commitment to researching new in-flight uses for its customers, Air France welcomed gamers, finalists in the “Air France Trackmania Cup”, developed by Ubisoft, who competed in the sky.

Air France and Latécoère are currently testing the ease with which this technology can be integrated and certified on commercial flights.

The Latécoère Li-Fi infrastructure installed on 12 seats on the Air France Airbus A321 has many advantages. It generates:

– a completely stable multimedia data exchange at a very high speed and very low latency;
– a reduction in the aircraft’s weight and therefore its fuel consumption, due to replacing copper cables with fibre optic technology.

The final round on board the flight

In collaboration with their partner Ubisoft, the national airline and the Toulouse equipment manufacturer organized the final of the “Air France Trackmania Cup” tournament, launched at the Paris Air Show in June 2019. The finalists competed on this personalized version of the all-public video game Trackmania² Stadium. The winner of the tournament received two Paris-Montreal round-trip tickets for a private tour of Ubisoft Studios and a selection of Razer products (which equipped the competitors with its Hammerhead Bluetooth headsets).

In line with Air France’s sustainable development commitments, the CO2 emissions of this special flight will be offset via a carbon neutral compensation initiative.

For Antoine Laborde, Air France’s Innovation Manager: “We are very proud to be the first airline to launch a Li-Fi equipped aircraft and to organize an in-flight video game competition. This world first is the result of a great collaboration between Latécoère, Ubisoft and the Air France teams. I am convinced that this experience will pave the way for new in-flight entertainment experiences for our customers, especially with regards to gaming.”

“This first flight equipped with our Li-Fi technology is an important step in the roll-out of this technology in the aeronautical market. We are convinced that Li-Fi will revolutionize in-flight connectivity within the next 5 years. I am particularly pleased with the work carried out in collaboration with the Air France Industries KLM Engineering & Maintenance teams, who carried out the certification work on the solution and its integration into the cabin in record time,” added Yannick Assouad, CEO of Latécoère.

Deborah Papiernik, Director of Innovative Projects at Ubisoft, concluded by saying: “We are very pleased to have had the opportunity to participate in the launch of an innovative technology that has promoted a 100% French partnership, whilst being able to provide our expertise in video games. In-Flight Entertainment will undoubtedly quickly become a new playground for all.”