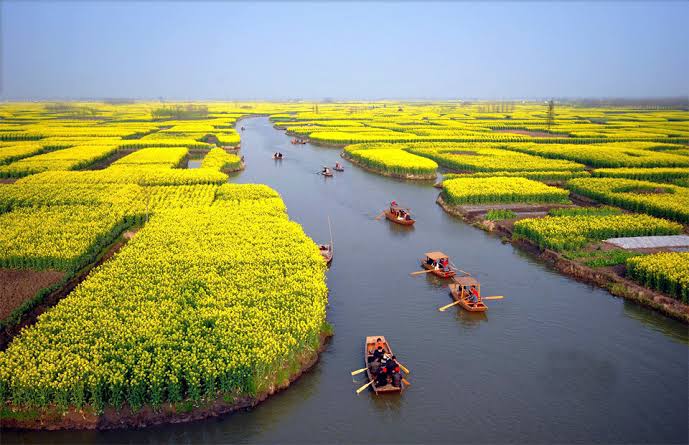 Xinghua, a county-level city in Jiangsu province, China, is an ideal destination for visitors to enjoy the blossoming of chrysanthemum and delicacy of hairy crabs. The 2019 New Era Jiangsu Tourism Development Forum was held there on October 15. Government officials at all levels, as well as tourism professionals and representatives from media organizations both in and outside of China, were invited to take part in the event and enjoy the water towns that populate the area and surrounding beautiful scenery as well as to discuss the future direction of the tourism industry. Meanwhile, an initiative for enhanced economic cooperation among the world’s four well-known destinations for the beauty of their flowers was launched by the local government at the event.

With a focus on rural lifestyle-themed tourism offerings, Xinghua has accelerated the transformation of the tourism industry, enabling visitors to immerse themselves in local iconic attractions such as the Xinghua Duotian Agrosystem and Water Forest Park.

The Xinghua Duotian Agrosystem, a distinctive world-level wonder for its unique water-land utilization method in low-lying land and its splendid raised field landscape, has been recognized as one of the Globally Important Agricultural Heritage Systems by the FAO. Taking advantage of the vast sea of flowers that form part of the Xinghua Duotian Agrosystem, Xinghua launched an initiative calling for enhanced international exchanges and economic cooperation with the lavender gardens of Provence, cherry blossoms of Tokyo and tulip gardens of the Netherlands, with the aim of achieving financially win-win results based on further development of destinations known for their flowers around the world.

Representatives from French, Dutch and Japanese tourism organizations operating in China respectively expressed their support for the initiative and intent to join in the collaboration. Chinese tourism service providers including Tongcheng Tourism, Ctrip, Tuniu and Lvmama said they would contribute their advantages in resources and channels to facilitate the development of an “industry cluster” based on the flower fields and related tours.

The integration of culture and tourism is based on a profound cultural heritage. Xinghua is home to 92 historical and cultural sites, among which, three are key state-level sites, 12 are at the provincial level and 77 are at the county level. The town is also home to 124 projects directly related to the conservation of intangible cultural heritage, among them, the Maoshan haozi (a style of folk song performed to synchronized movements), Moashan boat racing and Zhuhong Town wooden boats. Xinghua has also been the birthplace of many of China’s luminaries over the centuries, including 14th century writer Shi Nai‘an, 18th century painter Zheng Banqiao, 19th century Qing Dynasty scholar-official Liu Xizai, novelist Bi Feiyu, Hong Kong-Zhuhai-Macao Bridge chief architect Lin Ming and leading hematologist and Medical School of Shanghai Jiao Tong University tenured professor Wang Zhenyi.

Xinghua party secretary Li Weiguo said during his presentation on the unique characteristics of Xinghua: “Xinghua is a city featuring abundant water resources. Serving as a model for the country’s ecological protection on a nationwide scale, the city is becoming a national model for ecological and cultural development. Xinghua is well-known across China for its “seas of flowers” and beautiful natural scenery. The city boasts a profound cultural heritage and positive educational environment. Its strong position in terms of environmental protection coupled with the deep heritage paves the way for the prosperous development of the city’s tourism industry.