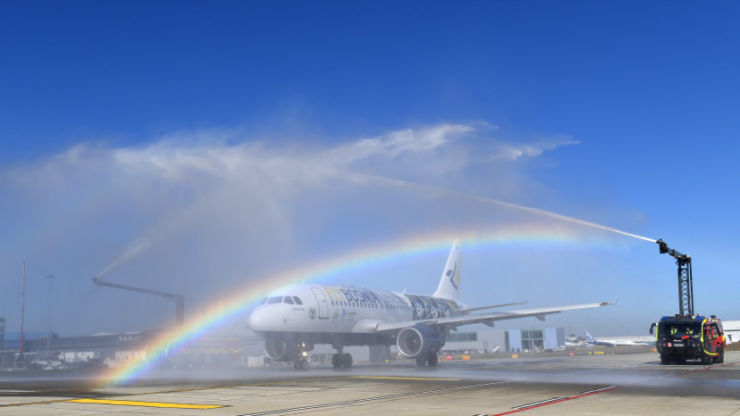 FlyBosnia today celebrated its inaugural flight from London Luton Airport to Sarajevo International. The ceremony was attended by senior figures from FlyBosnia, including CEO Tarik Bilalbegović, who was greeted by CCO of London Luton Airport, Jonathan Pollard. They were joined by dignitaries including HE Vanja Filipović, Ambassador of Bosnia and Herzegovina to the UK and HE Matt Field, British Ambassador to Bosnia and Herzegovina.

Jonathan Pollard, LLA’s Chief Commercial Officer said: “We are delighted that FlyBosnia has chosen London Luton Airport as its UK base. This is the first and only direct flight to Sarajevo to operate from any UK airport in over a decade so we are delighted to be part of this success.”

Tarik Bilalbegović FlyBosnia CEO said: “It is a great pleasure for me to be here today on the occasion of our inaugural flight from London to Sarajevo. FlyBosnia has ambitious plans for expansion and London is a key destination for us, as our first European destination – other European cities will be following closely behind.”

To celebrate its first flight, FlyBosnia is hosting a group of more than one hundred travel agents, media representatives and community figures. They will be visiting Sarajevo and exploring other attractions in the region, including the historic city of Mostar.

HE Vanja Filipović, Bosnia and Herzegovina’s Ambassador to the UK said: how delighted he was to be attending the occasion. He noted: “This is a wonderful opportunity to open up tourism to my country, as well as strengthening commercial links with the UK. I am sure that the travel agents, media and other guests on the inaugural flight will have a wonderful time exploring Bosnia and Herzegovina and we look forward to welcoming many more British visitors to our country from now on.”