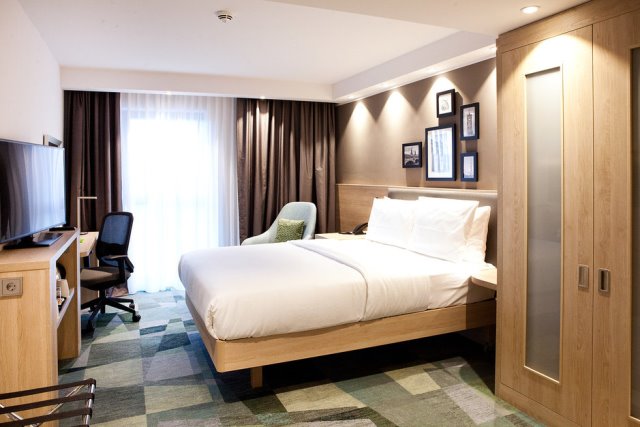 And, with more than 700 properties and more than 93,000 rooms in its pipeline – the largest ever in brand history and within the Hilton enterprise – Hampton is helping propel Hilton’s growth during its dynamic 100th anniversary year.

A key to Hampton by Hilton’s global success is the brand’s regionalization of hotel prototypes and room designs to meet the diverse needs of its customers. Though each property is unique based on local market-based variations, each stay comes with consistent friendly and thoughtful service, complimentary hot breakfast, free WiFi and a passionate commitment to guest satisfaction backed by the 100 percent Hampton Guarantee, making the brand a favorite for travelers worldwide.

Hampton now offers more than 50 properties and nearly 7,000 rooms across nine countries and territories in the Caribbean and Latin America and aims to add nearly 15 properties and more than 1,750 rooms by 2022, including a first-in-country location in El Salvador, set to open in 2021. Hampton’s growth in the region supports the company’s larger expansion strategy across the Caribbean and Latin America, where Hilton has nearly 150 open properties welcoming guests across 23 countries and more than 90 projects in the development pipeline.

Hampton by Hilton’s growth extends to Europe with nearly 90 open properties. The brand recently expanded into Belgium with Hampton by Hilton Antwerp Central Station and France with Hampton by Hilton Paris Clichy. Hampton also just announced a partnership with Alshaya Group, where the international franchise operator will develop 70 Hampton properties in nine countries across the Middle East, North Africa and Russia. With the first hotel expected to open in 2021, the Alshaya Group will deliver 50 hotels in the next eight years, with another 20 in the pipeline, significantly expanding Hampton’s presence across three continents.

The brand’s tremendous international growth has also occurred in the Asia Pacific region where Hampton by Hilton has achieved 180 percent year-over-year growth, with China catalyzing this rapid expansion, including the recently opened Hampton by Hilton Changsha South Station and Hampton by Hilton Guangzhou Dongxiaonan. Hampton, which opened its first Chinese property in 2015, is now the No.1 fastest-growing international hotel brand in the country just four years later and is set to open its 100th hotel later this year. The brand has a strong pipeline of over 260 signed hotels and 40,000 rooms in China alone.

Hampton has been recognized as the No. 1 ranked lodging franchise for the past 10 years, and one of the top five franchise brands of the 21st century, according to Entrepreneur® magazine. Hampton continues to lead the category in guest satisfaction as well, awarded top rankings by several consumer, travel and trade publications worldwide. Hampton is part of Hilton Honors®, the award-winning guest-loyalty program for Hilton’s 17 distinct hotel brands, which offers members who book directly through preferred Hilton channels access to instant benefits. Members also enjoy popular digital tools available exclusively through the industry-leading Hilton Honors mobile app, where Hilton Honors members can check-in, choose their room and access their room using a Digital Key.