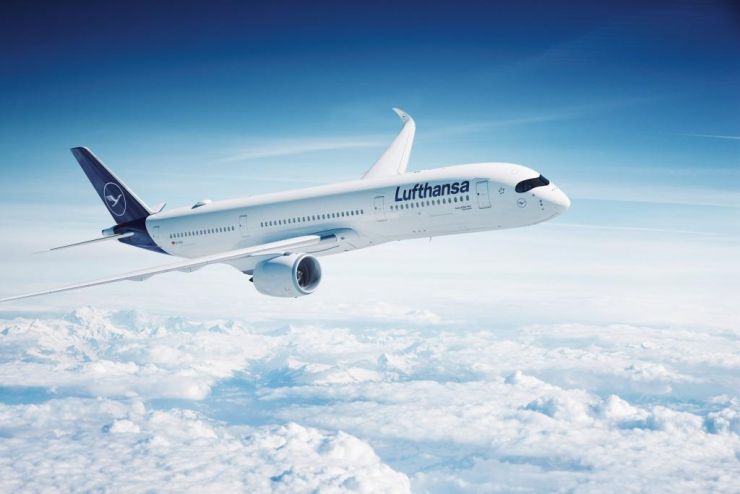 Lufthansa Group to Expand Long-Haul Program from Frankfurt and Munich

Lufthansa Group is consistently continuing the expansion of its tourist-oriented long-haul program from its hubs in Munich and Frankfurt. Beginning with the 2020 summer flight schedule, leisure travelers in particular will benefit from attractive new destinations. The focus is on North American destinations – as of next summer, Lufthansa will be expanding its services to include Las Vegas, Phoenix, Anchorage, Seattle, Orlando, Detroit. In addition, Bangalore, a destination in Asia, is added to the timetable in Munich. The majority of the flights will operate in cooperation with Eurowings, which will be using a fleet of Airbus A330 aircraft with up to 270 seats. Eurowings will already be present at Germany’s largest hub in Frankfurt beginning with the 2019/2020 winter flight schedule that goes into effect in late October, offering flights to the popular holiday islands of Barbados and Mauritius as well as to Las Vegas and Windhoek. From Munich, Eurowings has been offering long-haul connections to selected tourist destinations since Summer 2018.

“Lufthansa Group is significantly increasing its commitment at the Munich hub and continuing its expansion to a hub for Asia with the addition of Bangalore. At the same time, Lufthansa Group is one of Europe’s largest providers of holiday travel. Demand in this area in particular is rising sharply. We will therefore be expanding our long-haul program from Munich and Frankfurt in cooperation with Eurowings in addition to the offers that have already been planned for Fall 2019. Lufthansa’s feeder flights and the Frankfurt and Munich hubs will make it even easier for our passengers to reach the most beautiful places in the world in future,” says Harry Hohmeister, Member of the Executive Board of Deutsche Lufthansa AG and Chief Commercial Officer Network Airlines. Lufthansa will support the marketing of the new Eurowings long-haul destinations with its global sales strength and with high-quality service processes on the ground.

“With the new 2020 summer destinations from Munich and Frankfurt, we are demonstrating once more how we combine the strengths of the two airlines to the benefit of our customers: with a product range tailored to holidaymakers and families and with a fresh, modern, innovative on-board product from Eurowings – supported by Lufthansa’s marketing and sales power. This superb line-up allows us to position Lufthansa Group in the growing long-haul tourist market,” says Thorsten Dirks, Member of the Executive Board of Deutsche Lufthansa AG and CEO of Eurowings.

The new destinations from Munich in detail:

Another U.S. destination from Munich is Detroit. Beginning on 4 May 2020, Lufthansa will fly to the city in Michigan five times a week – on Mondays, Wednesdays, Thursdays, Fridays and Saturdays. The flight will depart at 12:40 p.m. and land at 3:45 p.m. local time. The return flight to Germany will take off at 5:35 p.m. local time, arriving in Munich at 7:45 a.m. the next morning.

As of 31 March 2020, Lufthansa will fly to the Indian metropolis of Bangalore five times a week – on Tuesdays, Thursdays, Fridays, Saturdays and Sundays. The flight will take off in Munich at 11:55 a.m. and land at 0:05 a.m. local time the following day. The return flight to Germany departs at 1:45 a.m. local time, arriving in Munich at 7:30 a.m.

All of these cities will be served from Munich for the first time with the state-of-the-art and efficient Airbus A350-900.

In addition to these flights, the Lufthansa Group will offer two additional U.S. destinations from Lufthansa’s Munich hub: Eurowings will fly to Las Vegas twice a week as of 6 April 2020, on Mondays and Fridays. Flights will depart from the Bavarian capital at 11:45 a.m. and land in Las Vegas at 2:40 p.m. local time. The return flight takes off from Las Vegas at 4:30 p.m. and arrives in Munich at 12:55 p.m. the next day. These summer connections supplement the year-round connections to the glittering metropolis offered by Lufthansa from Frankfurt three times a week.

Another U.S. destination from Munich is Orlando. As of 7 April 2020, Eurowings will fly an Airbus A330 to the city in the Sunshine State Florida three times a week – on Tuesdays, Thursdays and Sundays. Departure will be at 9:10 a.m. and the flight will land at 1:55 p.m. local time. The return flight to Germany departs at 3:45 p.m. local time, arriving in Munich at 7:20 a.m. the next morning.

The new destinations from Frankfurt in detail:

As of 29 April 2020, Eurowings will fly to Phoenix/Arizona from Germany’s largest hub five times a week – on Mondays, Tuesdays, Wednesdays, Fridays and Sundays. The flight will take off from Frankfurt at 2:05 p.m. and arrive at its destination at 5:05 p.m. local time. The return flight will depart from Phoenix at 6:55 p.m. and arrive in Frankfurt at 3:05 p.m. the next day.

New in the 2020 summer timetable from Frankfurt: the city of Anchorage in the U.S. state of Alaska. Eurowings will fly there three times a week beginning on 1 June 2020 – on Mondays, Thursdays and Saturdays. The outbound flight takes off from Frankfurt at 10:30 a.m. and lands in Anchorage at 11:55 a.m. local time. The return flight leaves Alaska at 1:55 p.m. local time, landing in Frankfurt at 10:45 a.m. the next day.

In addition to these flights, the Windhoek and Las Vegas destinations that are already available in the 2019/2020 winter flight schedule will continue to be offered in the summer of 2020.

Hawaiian Airlines today announced it is offering drive-through and walk-up COVID-19 pre-flight tests for its guests traveling to the islands from Los Angeles, Las Vegas, Portland and Seattle. Guests who test within 72...

Qantas today operated its first flight between Mildura and Sydney, coinciding with the opening of the New South Wales border to Victoria. The route was originally scheduled to start in March but was delayed due to COVID...