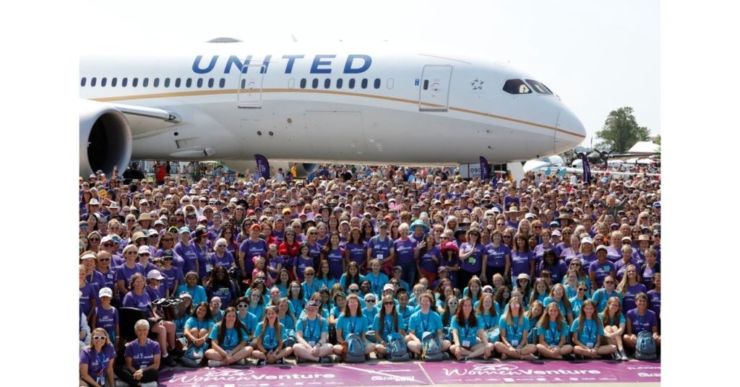 Yesterday, United flew a Boeing 787-8 Dreamliner crewed exclusively by women to the largest airshow in the world, EAA AirVenture in Oshkosh, WI, to symbolize the airline’s commitment to supporting women in aviation. Joining the pilots and flight attendants onboard this historic flight were nearly 100 other women representing a variety of United’s workgroups such as Airport Operations, Inflight Services, Flight Operations, Technical Operations, Network Operations and more.

“Women are in critical leadership roles across United and what better way to demonstrate our commitment to women in aviation than arriving with more than 100-strong at the largest airshow in the world,” said Linda Jojo, executive vice president of technology and chief digital officer. “We are proud of our strong legacy of supporting women in this field, but we are also excited to be a part of shaping the future of aviation so that it includes even more women.”

Upon arrival in Oshkosh, United female crew members and leadership met with EAA GirlVenture campers, approximately 70 female high school students interested in aviation, to discuss pursuing careers in the field and to tour the aircraft. The airline’s Chief System Pilot Bebe O’Neil later announced an additional scholarship for aspiring female aviators at the Women in Aviation Luncheon. United has supported the Women in Aviation International Conference for more than a quarter of a century and annually provides scholarships to women pursuing careers as pilots.

Today’s initiative demonstrates United’s longstanding commitment to supporting women in aviation such as employing the most female pilots of any major airline and as the first and only commercial airline to sponsor an all-female technicians team in the international aerospace skills competition. In 2018, United held Girls in Aviation Day events in a record number of 12 locations around the world, and has plans to add even more locations this coming fall.