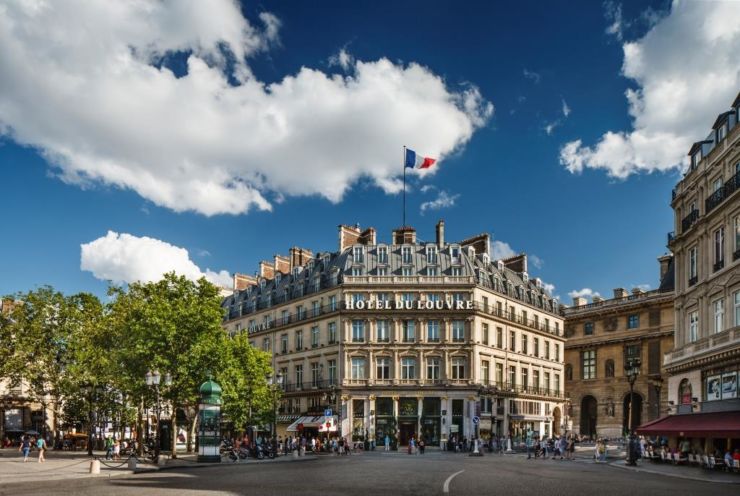 As part of The Unbound Collection by Hyatt, a collection of distinct hotels with their own narrative, Hôtel du Louvre sits in the heart of the city’s Palais-Royal district, surrounded by the Musée du Louvre, the Comédie-Française, the Palais Garnier and Palais Royal. The 164 rooms and suites have been fully redesigned to reflect the hotel’s original Parisian style, with high ceilings, elegant moldings, marble floors reminiscent of the Opéra Garnier and chic Parisian furniture. Colorful and evocative illustrations by Emmanuel Pierre lead guests from the rooms to the lobby and dining areas, which are reimagined by renowned architect, George Wong. With its charm and fascinating past, this story-worthy property will inspire guests to visit the City of Lights and create their own one-of-a-kind experience.

Originally opened in 1855 as Paris’ first grand hotel, the property is a self-standing central landmark that epitomizes the effervescence of Paris during Napoleon III’s empire. The Second French Empire architecture and the modern interior design provide a bold and thoughtful contrast to this extraordinary hotel. It draws inspiration from the personalities that have shaped the hotel’s rich history, including Sir Arthur Conan Doyle, Victor Hugo and Sigmund Freud.

“Once again this magnificent, historic building will open its doors to guests looking for a sanctuary of calm within the bustling city,” said Fanny Guibouret, general manager, Hôtel du Louvre. “We invite independently minded guests to experience the joy of slowing down and embracing Paris. Whether that means joining a local game of pétanque in the Palais Royal, lunch on the grass in the Tuileries Gardens or leisurely walks through the streets and alleyways of the capital, we invite guests to join us for an unconventional stay.”

The hotel’s 106 sunlit rooms and 58 suites are set in typical French décor, some of which also offer balconies with views over the Opera Avenue, Comédie-Française and the Louvre Museum. Some of them are filled with remarkable stories from the past. For example, Sigmund Freud wrote his ‘Leonardo da Vinci, A Memory of His Childhood’ in 1910 in one of the hotel’s suites. Also, Camille Pissarro found his inspiration at Hôtel du Louvre while working on eleven paintings depicting the view of the Opéra Garnier. In addition to this colorful past, Emmanuel Pierre’s colorful and dreamlike illustrations greet guests as they arrive.

The hotel will now be home to Brasserie du Louvre, the first Parisian ‘Brasserie Bocuse’ serving traditional French cuisine with recipes developed by Paul Bocuse, known as the “Chef of the Century.” The restaurant is part of Bocuse’s Restaurants et Brasseries de Lyon® which have been embodying Lyon’s gastronomy and French expertise for the past twenty-five years. L’Officine du Louvre Bar is located under the hotel’s magnificent glass roof. The bar serves unique herbal-based cocktails celebrating Napoleon III’s love of botany.

The hotel is home to eight meeting rooms which are designed like studios, each decorated with a different theme around the famous personalities who shaped the hotel’s rich history. They range in size from 204 to 1,474 square feet (19 to 137 square meters) and are all equipped with the latest technology.

Located on the mezzanine level of the hotel, guests can take advantage of the 24-hour fitness center with a range of the latest technology and equipment suitable for a complete workout. The fitness center has also undergone renovation as part of the hotel’s refurbishment.