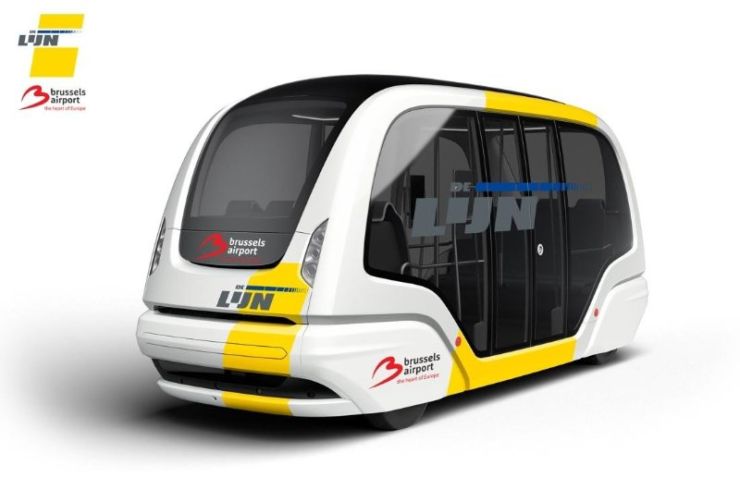 The self-driving people mover has clocked up its first few metres at Brussels Airport. Over the coming 3 days, the shuttle bus will perform several demo trips without passengers to test the technology in a real-life environment. These tests see De Lijn and Brussels Airport’s ambitious pilot project step up a gear. In 2021, the self-driving people mover will commute autonomously between the terminal and cargo business area and parking lots. “It’s set to become the showpiece of public transport in Flanders,” says Flemish Minister for Mobility, Ben Weyts. “Foreign visitors will instantly perceive us as an innovative region.”

Brussels Airport is the setting for an ambitious pilot project with a self-driving people mover operated by De Lijn. In the coming days, the shuttle bus from manufacturer 2getthere will make its first demo trips past the terminal so passengers who stop at the spring terrace will be able to see it drive by. For the time being, the bus will run without passengers.

Driverless vehicles abroad typically drive in their own dedicated lanes. However, the pilot project at Brussels Airport ultimately aims to enable the self-driving shuttle to navigate autonomously through mixed traffic.

“This self-driving shuttle is state-of-the-art technology that fuels the imagination,” says Flemish Minister for Mobility, Ben Weyts. “And this pilot project is bringing that imagination to life. We’re harnessing innovation to further strengthen the De Lijn service offering. This is an investment in the future, in efficiency, in image and in the seductive power of our public transport. Flanders and De Lijn are playing a truly pioneering role in this regard.”

“‘Intelligent mobility’ is one of our strategic priorities for sustainable development over the coming years,” says Brussels Airport Company CEO, Arnaud Feist. “We want to encourage passengers and employees to increasingly travel to the airport by public transport. This joint project with De Lijn, which commenced in 2015, is one of the initiatives specifically aimed at achieving this objective. We’re now exploring how self-driving buses can be deployed to improve the efficiency of passenger transport on the airport grounds.”

The self-driving electric bus follows virtual routes which it uses to continuously calculate its position. Deviations from the planned route are corrected on the basis of artificial reference points. The vehicles are also equipped with sensors for detecting other objects in the vicinity.

CEO of manufacturer 2getthere, Carel C. van Helsdingen, states: “De Lijn and Brussels Airport are setting a new global standard with this project. Selection, based on specific reliability and safety requirements in addition to proven test results, requires a rigorous approach based on innovative technology. It’s a challenging project and we’re proud to have been selected as the manufacturer. We’re looking forward to our continued collaboration, the system rollout and the future transportation of passengers.”

The technology can also help support drivers in the field of road safety. And there are benefits for tourism too. Foreign visitors instantly perceive Flanders as a contemporary region, where investments are made in innovation.

“We’re on the verge of a breakthrough in autonomous transport,” confirms De Lijn director general, Roger Kesteloot. “It’s now a question of getting on board and developing technology tailored to public transport. In the context of basic accessibility, we’re working on the development of a highly developed basic network. If we can reinforce this with a flexible range of shared shuttle vehicles, then we can satisfy the major mobility challenges of the future.”

De Lijn and Brussels Airport Company intend launching an autonomous shuttle service between the airport terminal and the cargo business zone and parking areas in 2021. Safe, sustainable and flexible self-driving electric people movers will be deployed to provide a high frequency service. The shuttle is intended to run independently at an average speed of 20 km/hour over a short, fixed route that’s equipped with magnets and sensors. The magnets are located in the ground and serve as beacons that indicate the way. The sensors are built into the bus in order to detect other objects in the vicinity. Local modifications may be needed to reduce traffic complexity. However, as the people mover is designed to share the road with other traffic, no separate lanes will be required.

The next steps in the self-driving people mover project