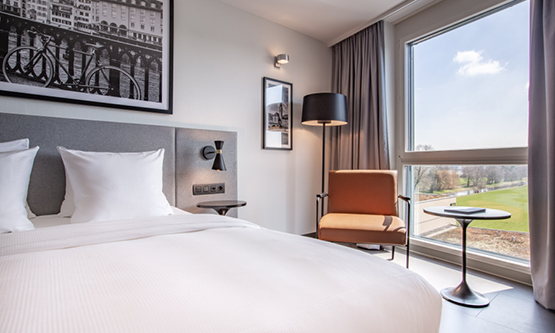 Radisson Hospitality AB announces the opening of the Radisson Hotel Zurich Airport following a comprehensive reconstruction and rebranding. Arriving in Switzerland’s largest city, the hotel will be the second Radisson-branded property to open in Europe – and the first in the German-speaking region – when it opens on 15 May 2019.

As part of a repositioning and rebranding strategy, the former Park Inn by Radisson Zürich Airport in Rümlang has reopened under the Radisson brand. This is all part of the group’s plan to introduce the sophisticated upscale full-service hotel brand to the Europe, Middle East & Africa (EMEA) region.

Yilmaz Yildirimlar, Area Senior Vice President Central & Southern Europe for Radisson Hotel Group, said: “We are extremely proud to welcome guests to the first Radisson hotel in Switzerland. The transformation around the Zürich Airport is significant, and the rebranding of the hotel represents a key step for the further development of the property in line with the Radisson Hotel Group brand strategy.”

The Radisson Hotel Zurich Airport has undergone extensive renovation work to prepare it for reopening. All 211 guestrooms have been completely refurbished, along with the communal areas of hotel – creating a fresh new look that will appeal to both business and leisure travelers.

Meeting and conference attendees will also receive the warmest of welcomes at the new hotel. Its modern meeting infrastructure includes 10 conference rooms with natural daylight, state-of-the-art video and audio technologies as well as complimentary wireless internet.

The location in Rümlang offers minimum commuting distances for guests: travel to Zürich Airport in the hotel shuttle takes just seven minutes, while 20 minutes on the city train brings visitors to Zürich’s main downtown street, Bahnhofstrasse. The hotel’s proximity to the airport also complements the Radisson Blu Hotel, Zurich Airport, which is located directly in the airport terminal.

In addition to the reopening of the Radisson Hotel Zurich Airport, Radisson Hotel Group has identified several other projects that will be part of its repositioning and rebranding strategy by 2022. The group has invested more than €60m in the Central & Southern Europe region to drive this plan.

Following an extensive makeover of the hotels in Frankfurt and Cologne, the Radisson Blu hotels in Basel and Milan – as well as the Radisson Blu Schwarzer Bock Hotel, Wiesbaden – are currently undergoing renovation and redesign. The strategy also includes new properties such as the Radisson Blu Hotel, Geneva. Ideally located between Geneva Airport and the city center, the hotel will boast 250 rooms and a comprehensive MICE package – with its opening date planned for 2022.