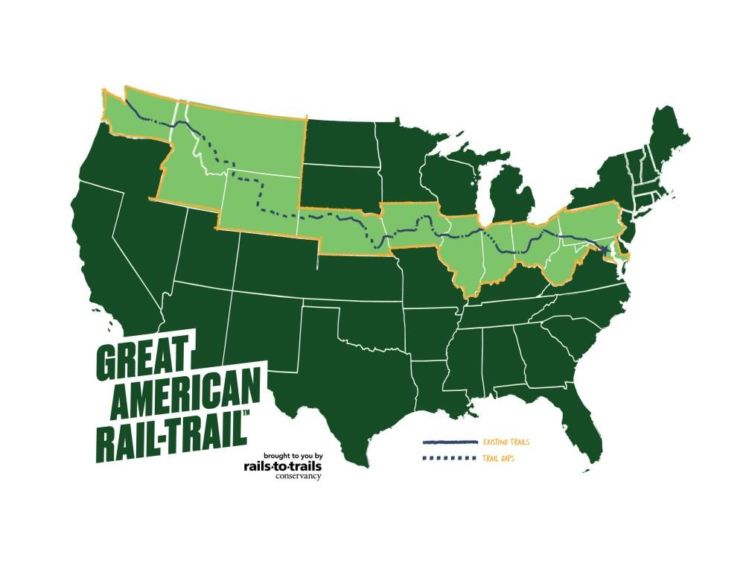 Rails-to-Trails Conservancy (RTC) today unveiled its preferred route for the Great American Rail-Trail™—or the “Great American”—underscoring the organization’s commitment to creating an iconic piece of American infrastructure that connects more than 125 existing trails and 90 trail gaps over 3,700+ miles between Washington, D.C., and Washington State.

“Since the 1980s, RTC has understood the potential of a trail like the Great American Rail-Trail that could connect the nation. That vision has been a guidepost for the organization for 30 years. Now, we have the chance to create from that vision a national treasure that unites millions of people over thousands of miles of trail,” said Ryan Chao, president of RTC. “This trail is a once-in-a-lifetime opportunity to provide—together—an enduring gift to the nation that will bring joy for generations to come.”

The preferred route of the nation’s first cross-country multiuse trail is detailed in a comprehensive report released by RTC today. The Great American Rail-Trail Route Assessment Report outlines RTC’s recommendation for the route, developed in close partnership with states and local trail planners and managers.

“When defining the preferred route of the Great American Rail-Trail, we sought a cross-country route that would provide the highest-quality experience while delivering significant economic and social benefits to the communities it connects,” said Liz Thorstensen, vice president of trail development at RTC. “This route achieves those things and more, in large part thanks to the input, support and leadership of state agencies and local partners who have built the existing trails that will make the Great American Rail-Trail possible, and whose ongoing collaboration is vital to its completion.”

The route assessment was developed over 12 months with input from RTC’s GIS analysis of more than 34,000 miles of multiuse trails; review of state and local trail plans; and discussions with hundreds of local trail partners and state agencies representing the trails along the route. The preferred route aligns with RTC’s and its partners’ criteria that specify the Great American be one contiguous route that is initially more than 80 percent, and ultimately entirely, off street and separated from vehicle traffic; comprises existing trails to the extent possible; is the most direct route possible between Washington, D.C., and Washington State; is amenable to the state and local jurisdictions that will host it; and will serve as a catalyst for local economic development, including providing services for long-distance trail travelers.

Traveling through 12 states and the District of Columbia, RTC and its partners have defined the Great American Rail-Trail as more than 3,700 miles, comprising more than 1,900 miles of existing trails—those trails already developed that will help carry the route across the country—and more than 1,700 miles of “trail gaps”—sections of trail in need of development to fully connect the Great American into one contiguous route.

As the nation’s first cross-country multiuse trail, the Great American will connect people of all ages and abilities with America’s diverse landscapes and communities. Nearly 50 million people living within 50 miles of its route will be able to call this iconic American infrastructure their own as the trail delivers new access to the outdoors and new opportunities for physical activity and recreation. Hundreds of communities along the route will experience new opportunities for business development and tourism thanks to the Great American Rail-Trail, all while contributing to the growth of the country’s burgeoning outdoor economy—one of the largest sectors in the United States.

“We believe the Great American Rail-Trail will be a transformative project for the nation, as it magnifies on a grand scale the benefits that trails have delivered to communities for decades,” said Chao. “Whether bridging gaps within and between communities, creating safe walking and biking access to jobs, transit, shopping and green space; or serving as recreation for cyclists, runners and casual daily explorers, this will be America’s trail.”

While completion of the Great American Rail-Trail is a significant undertaking and several decades away, 52% of the path is already complete and available for public use, with plans for RTC to work in partnership with states and local jurisdictions and organizations to bring new segments online year after year. RTC and its partners view the route assessment as a blueprint for the trail’s development that is based in the reality of existing plans and priorities.

To spur trail completion, RTC has identified initial catalyst initiatives—projects or challenges that would most benefit from RTC’s national breadth of resources. Through these initiatives, RTC will directly support local and state partners, investing time, expertise and organizational resources in specific projects that are critical to catalyzing the completion of the Great American Rail-Trail.

RTC is also enlisting the support of trail lovers across the country to demonstrate national enthusiasm for the Great American’s development. Setting a goal to reach 1 million pledges in support of the cross-country trail, RTC is asking the public to pledge at greatamericanrailtrail.org.

“We know that it will take a significant investment of time, resources and energy to complete the Great American Rail-Trail—but it will be worth it. It will take the help of trail lovers and leaders to bring this vision to life,” said Kevin Mills, RTC’s vice president of policy. “Federal, state, local and private investment will all be needed to complete this project. To support the ongoing advocacy necessary to secure critical public resources, we hope everyone will be inspired to proudly pledge to show the widespread desire that exists for this trail.”

Today, in celebration of the Great American route reveal, RTC and its partners will host a series of cascading live events in select locations on trails along the preferred route, including Washington, D.C.; Columbus, Ohio; Three Forks, Montana; and South Cle Elum, Washington. These events will be broadcast live on RTC’s Facebook Page (@railstotrails, #GRTAmerican) and at greatamericanrailtrail.org from 1 to 2 p.m. EDT (10 to 11 a.m. PDT).

The Great American Rail-Trail is a signature project of RTC and the most ambitious in its portfolio of TrailNation™ projects—the organization’s initiative to encourage the rapid replication of regional trail networks across the country. The Great American was first envisioned at RTC in the late 1980s, and for decades has been an underpinning of the organization’s strategy to create a nationwide network of public trails. 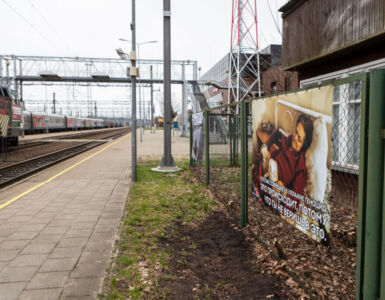