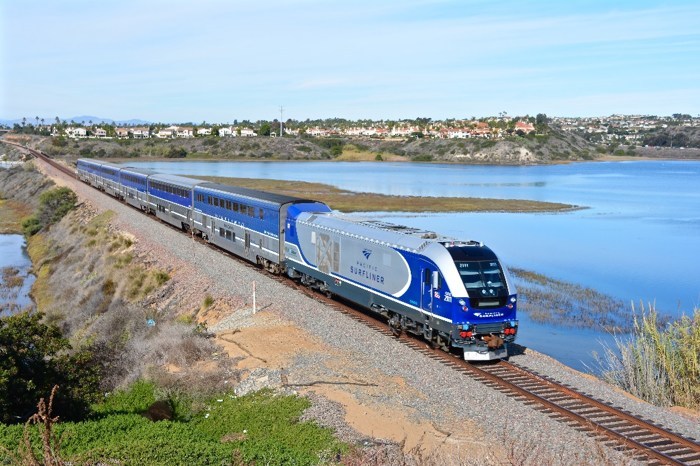 The new Charger locomotive is the first passenger locomotive to receive the stringent Tier IV emissions certification from the Environmental Protection Agency, making it one of the cleanest diesel-electric passenger locomotives in operation today. The state-of-the-art locomotive, manufactured at Siemens’ solar-powered plant in Sacramento, Calif., now powers the majority of 24 daily Pacific Surfliner trains traveling through Southern California. Almost 90 percent cleaner than the locomotives they replaced, the Charger locomotives allow the Pacific Surfliner service to meet growing demand for ridership while providing quieter, more efficient passenger rail service that helps relieve congestion on adjacent freeways like Interstate 5 and U.S. 101.

“We have a commitment to enhancing our passengers’ experience as well as being good neighbors in the communities we serve. This new locomotive helps to fulfill both of these goals,” said Al Murray, chairman of the LOSSAN Agency, overseeing the Pacific Surfliner service.

Siemens built the Charger locomotives for transportation agencies across the United States as part of a multi-state procurement project. The 14 Charger locomotives used on Pacific Surfliner service were funded by Caltrans with approximately $100 million in state, federal and local funds, and replaced Amtrak-owned locomotives which were nearly 20 years old.